The mandatory federal requirement that Covid-vaccinated visitors to Canada also get a pre-flight PCR swab test is causing undue hardship for the Canadian travel and tourism industries, said a group of stakeholders in Vancouver recently.

Gathering for a press conference to express their concerns were executives from the Greater Vancouver Board of Trade, the British Columbia Hotel Association, Destination Vancouver and a leading Canadian travel retail company. They did so in support of the Canadian Travel and Tourism Roundtable, a cross-Canada coalition of leaders in the tourism and travel sector.

They collectively called on the federal government to remove “unnecessary, non-science-based obstacles to international travel arrivals to Canada” – namely the pre-flight PCR test for travellers who are already fully vaccinated against Covid-19. To continue the PCR test policy is threatening the survival of travel/tourism businesses across Canada and freezing the commerce of business travel, by forcing international travellers to reconsider plans to visit this country, said the group.

“The mandatory PCR testing is keeping international visitors away and we are now facing a dire winter season,” said Karen Soyka, the VP of business development for Destination Vancouver. “We need the federal government to make some common sense changes immediately.” 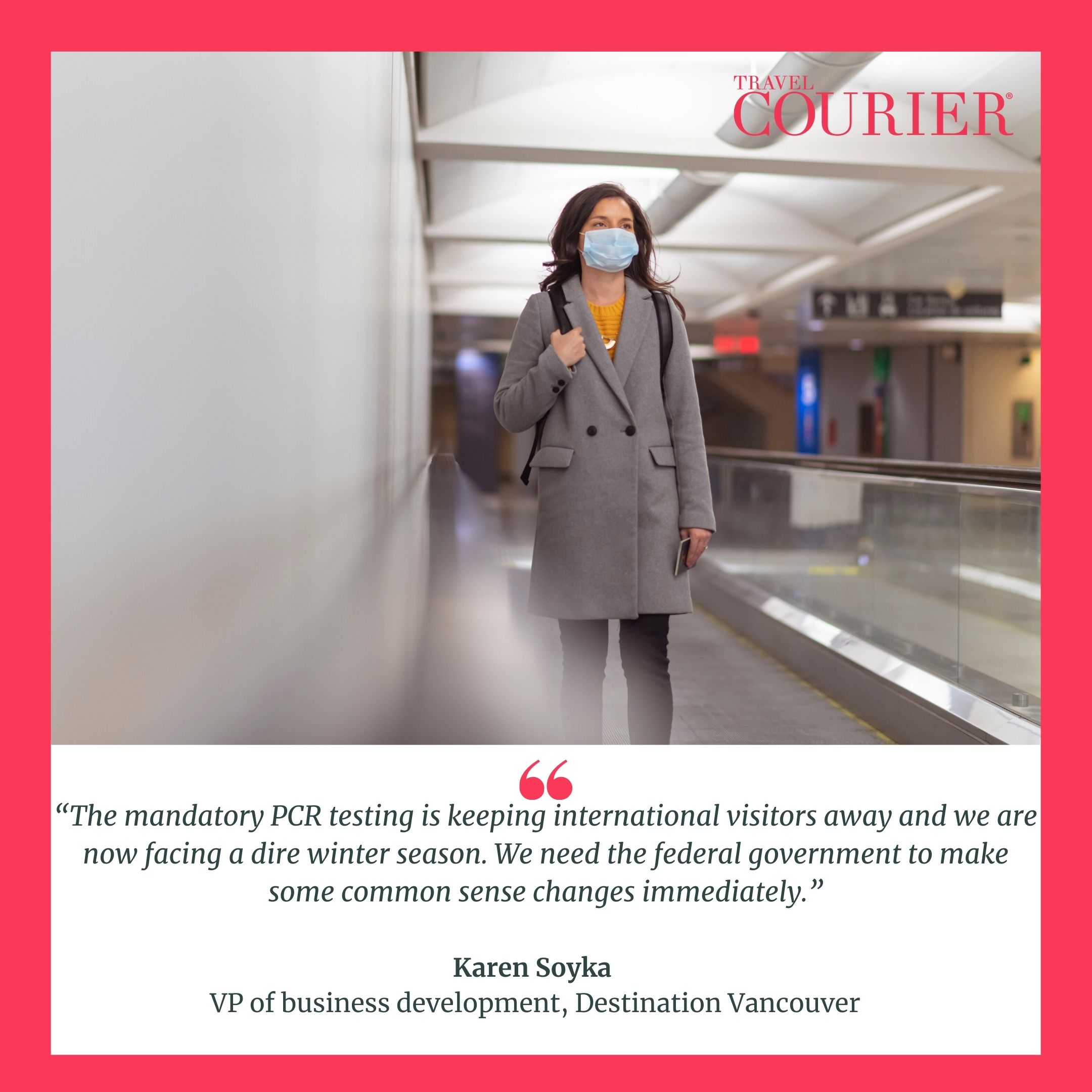 To support their case for removing the PCR test requirement, the group referred to the findings of the Covid-19 Testing and Screening Expert Advisory Panel, which had been set up by the federal government to study Covid-19 measures. In May, the panel recommended that travellers with proof of vaccination should not be required to take a pre-flight PCR test or face other measures like a quarantine – even though the extra level of testing reduced the likelihood of spreading the virus in Canada, it said.

“All we are asking is for the federal government to follow the science,” and to act on the recommendations of the panel that it had created and funded, said Claire Newell, founder and president of Travel Best Bets.

“The PCR test signals to international business travellers that Canada is not open for business,” she said. Newell noted that about 1,000 travel agencies across Canada had disappeared over the course of the pandemic, having either gone out of business, merged with other agencies or reverted to home-based operations.

Since the onset of pandemic, business operators in Vancouver who rely on international visitors are facing continued economic decline, says the Roundtable. The mandatory pre-flight PCR test to enter the country is leading international travellers to do business elsewhere, it said.

“Business travel from the U.S., Asia and around the world has pretty much come to a complete halt, and that is hurting our cities, especially Vancouver’s downtown core,” said Bridgitte Anderson, president & CEO of the Greater Vancouver Board of Trade. 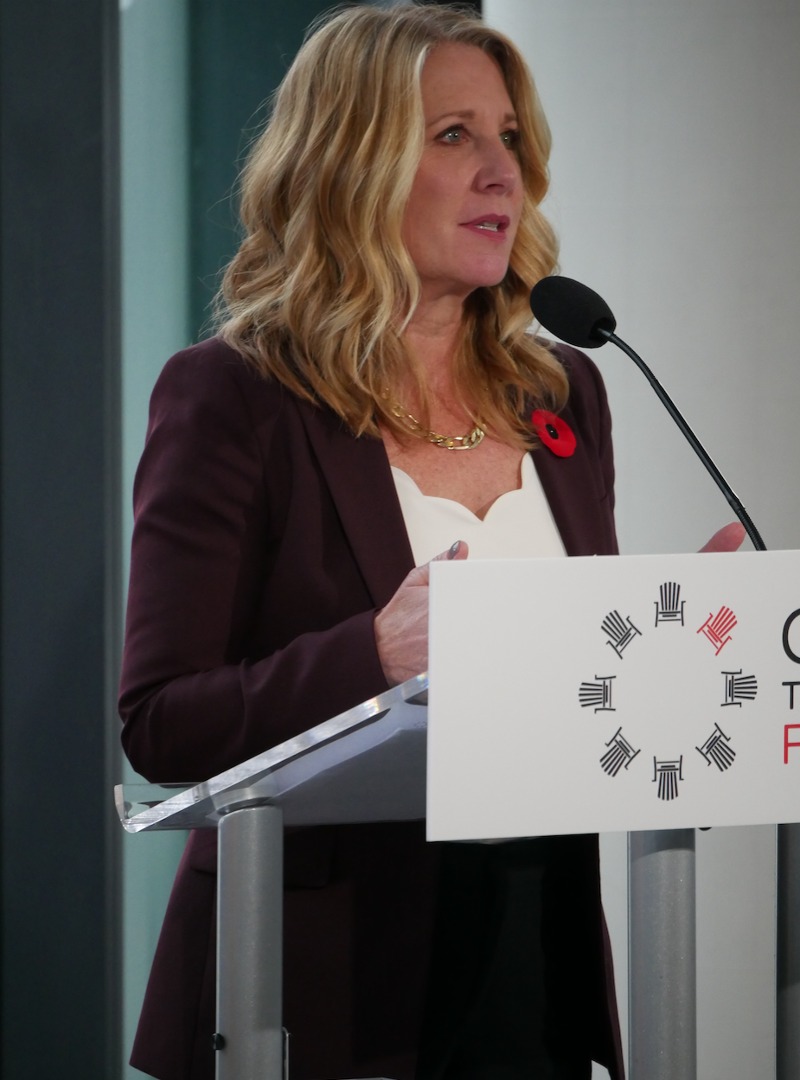 Bridgitte Anderson, president & CEO of the Greater Vancouver Board of Trade, addresses media at a press conference at the Fairmont Pacific Rim hotel in Vancouver.

Vancouver welcomed over 11 million overnight visitors in 2019, contributing $14 billion in total revenues to the Metro Vancouver economy, said the Board. But revenues fell by 70% in 2020.

“We have been supportive of government measures” to stop the spread of the virus, but “our patience is running thin,” said Mike Macleod, director of the BC Hotel Association.

“Some sectors are thriving, but ours is not,” he said, pointing to a weak 50% average occupancy rate for hotels and resorts around the province. He noted that ski resort operators are especially nervous now as they are subject to last minute cancellations, plus the dilemma of how to make plans like staffing in a shifting regulatory environment.

The accommodations sector has been kept afloat by the patronage of regional and Canadian national guests so far. “But there is no recovery until the borders are open,” he said.

The U.S. market is critically important to us,” said Anderson, who noted that Vancouver lost 193 major meetings, events and conferences in 2020 due to cancellations, and that many of those had been booked by American organizers. “Planners who are considering Vancouver as a venue for their event may realize that it’s easier, less complicated to go elsewhere.”

Those planners need lead times of two, three or even five years before the event they are organizing, said Anderson. “We need to be in front of those clients right now for meetings that will take place in 2024, 2025 and 2026,” she said.

Tianguis returns to the world stage

Canal has been 'uniting the world' for over a century