Raising spirits during the pandemic

Those working in the tourism industry say those who are finding themselves being worn down by the ongoing coronavirus pandemic may be able raise their spirits with a well-known Caribbean spirit.

Rum-based drinks are seen as perfect for quenching thirst during these warming days of summer, and prompting people to dream of vacations in breezy, tropical, sun-splashed locales, they say. 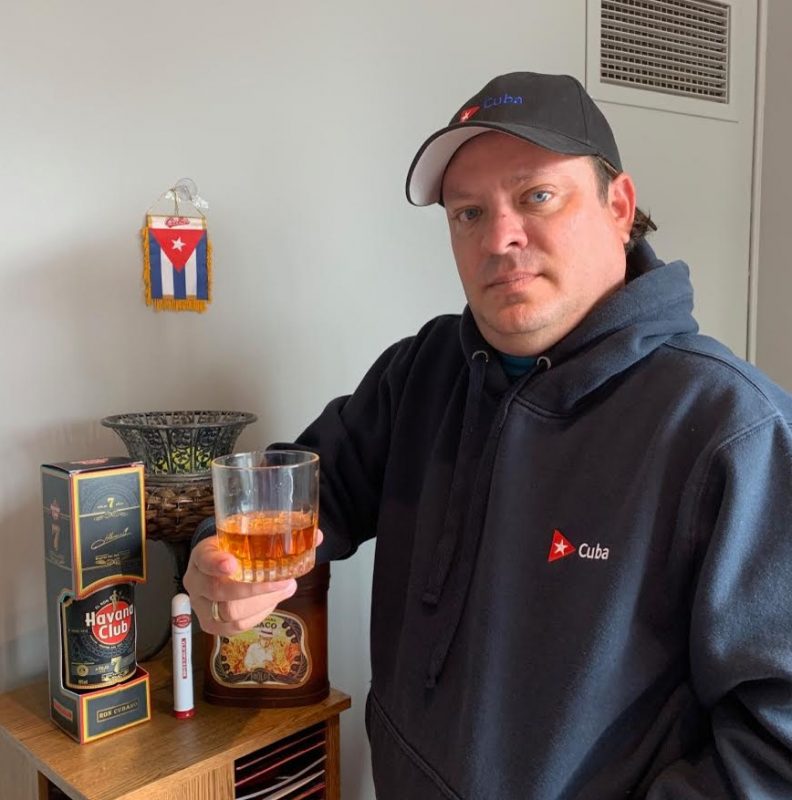 It’s hardly a surprise that Lessner Gomez appreciates rum, given where he was born and grew up.

Gomez, the Cuba Tourist Board’s director for English Canada, notes rum has been intertwined with Cuban culture and history for centuries, with his homeland having given the world such drinks as mojitos and daiquiris and Havana being home to a museum chronicling rum’s history.

Rum is produced throughout the Caribbean but Gomez believes the rum produced in his country stands alone.

“Cuban rum is my favorite spirit; its aroma, texture and flavor makes it unique when compared to other rums in the world,” he says. “My favorite brand is Havana Club, the more it’s aged, the better the flavour and, when savouring it, it’s like taking a trip through Cuba’s history. Havana Club is a brand of rum that is manufactured in Santa Cruz del Norte, Cuba. The brand was established in 1934 by Jose Arechabala and was nationalized in 1960. Since 1993 it has been produced by Havana Club International. From its brands my favorite is the Havana Club 7 years. “Havana Club 7 years has the flavours that encapsulate Cuba, its aromatic tobacco, its sweet tropical fruits that grow in its gardens, molasses, spices and vanilla from a long aging process that unfolds as it’s enhanced by the slow release of its aromas.”

Cuba has many famed bars happy to serve visitors rum, among them Havana’s Bodeguita del Medio and the Floridita, both of which regularly hosted Ernest Hemingway when he lived in the Cuban capital; and the Cabaré Tropicana, the patio of the Hotel Nacional, and what Gomez labels the “majestic lobby bars of the Meliá Habana, Meliá Cohíba, NH Parque Central, the Kempinski, SO Paseo and Malecón, Hotel Iberostar Packard, El Gato Tuerto, La Zorra y el Cuervo, among many others.”

Gomez says those vacationing in his homeland should make a point of returning home with with a reminder of the country that will easily enable them to make the likes of a Cuban-accented rum and coke upon their return.

“Cuban rum is part of our culture, foreign visitors love it, and for those that don’t drink they can buy it as a gift for family or friends because rum is Cuba, its tradition,” he says. “When we can travel again I invite all Canadians who love and visit Cuba to taste this delicious spirit, and when they savor it they will always remember my beautiful island because Havana Club rum is Cuba.” 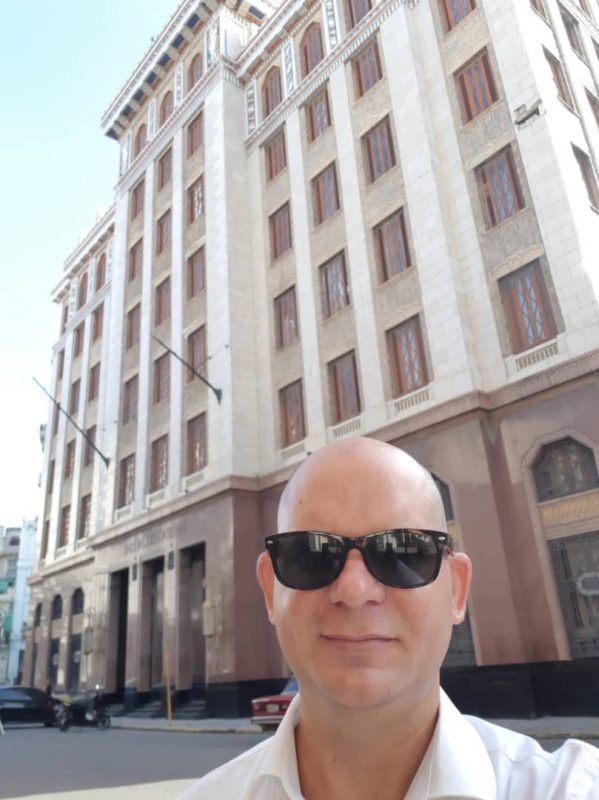 Lessner Gomez is far from the only Cuban tourism official who appreciates Havana Club, with his Toronto predecessor Eloy Govea also singing its praises.

“Havana Club is probably my preferred brand. And I say probably because I am not so certain after having tasted not so long ago the Santiago de Cuba brand,” says Govea, now working in tourism in Havana.

“A friend of mine treated me to a 12-year blend of Santiago de Cuba. It’s certainly very easy to love that. But even the plain Santiago de Cuba Añejo is fabulous! It’s hardly surprising though given the long tradition of rum of Santiago de Cuba.”
Govea’s favorite venue for enjoying rum cocktails is The Vista al Golfo bar in the storied Hotel Nacional. “Its old-fashioned decor, the photos of celebrities that have been guests there, the amazing view of the sea, the aura of the Mob’s presence… takes your experience to a whole new level,” he says of the Vista al Golfo, the walls of which are decorated with pictures of world leaders, movie stars, musicians and athletes who have visited it.
Govea says rum is deeply ingrained in Cuban culture. “There’s no party, dominoes game or any other social activity in Cuba without rum. And tourists like it as well, not only because it’s good, but also because it’s ridiculously cheap here in Cuba.”
“But there is much more than good tasting and good times being shared over. The production of sugar and byproducts like rum determined the key events that marked Cuban history and culture: the slaves brought from Africa to work on the sugarcane plantations, the railroad being established (even before it happened in Spain),  the coexistence of economic splendor and deep poverty,  the long history of contradictions and struggles…No wonder rum is so deeply associated to Cuba’s identity.”
Coronavirus has resulted in international travel being at a low ebb these days but Govea is eagerly awaiting the end of the pandemic and seeing the often steamy streets of Old Havana packed with tourists who know they can beat the heat at any time by ducking into a bar and having a frozen daiquiri.
“I cannot wait to see the many bars in Havana and other Cuban cities busting with excited visitors,” he says. “It’s not uncommon to hear from some tourists that the first notion that they had of Cuba was the image of certain guy named Ernest Hemingway drinking a daiquiri with double rum in the Floridita.” 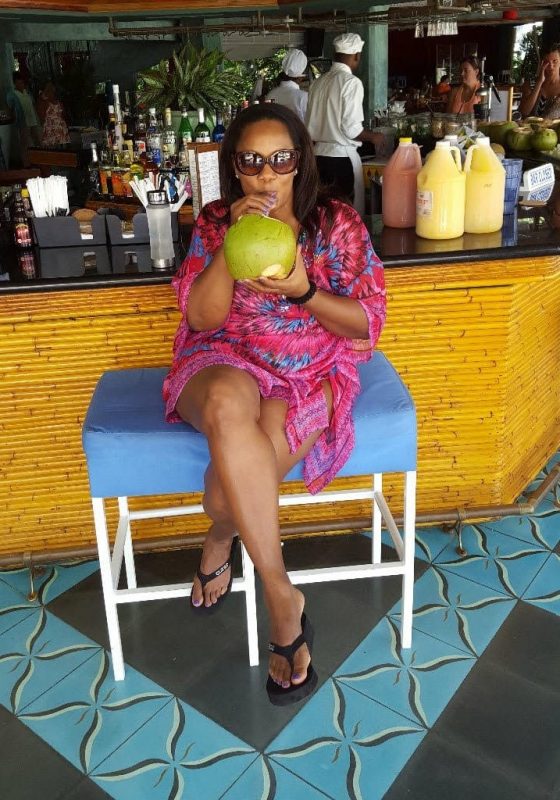 An Appleton rum product may well be the apple of Angella Bennett’s eye.
Bennett, regional director, Canada, for the Jamaica Tourist Board,  says she occasionally enjoys a Jamaican rum punch for Happy Hour and Appleton Estate Reserve Blend is one of her favourite rums for cocktails as “it’s rich, smooth and a lovely spirit to mix with fresh fruit juices and flavourful syrups.”
Bennett has several Jamaican venues that she says provide particularly memorable settings to enjoy a rum-based drink.
“If I’m looking for a picturesque spot to enjoy a drink back home, I’ll plan a visit to Rick’s Café in Negril – the cliffside bar is a beautiful place to sip on a cocktail while watching the sunset and the daredevil cliff jumpers,” she says. “Pier One in Montego Bay is another lovely waterfront bar serving tropical drinks and seafood. Oh, and I have to mention my favourite rum-based drink on the island. Created by the expert bartenders at the Jigger Bar at Melia Braco Village, the ‘Trelawny Mist’ cocktail is a deliciously tart and citrusy mix of rum, lemongrass tea, fresh lemon and simple syrup – yum!” Bennett notes rum has a long history in her country.
“Rum is synonymous with Jamaica and this distinct island spirit is an important part of our history, with its origins dating back to the 1600s. We take our rum production very seriously; the spirit is often found in our cocktails and our cooking and is integral to our island culture.
“One of Jamaica’s most popular tourist attractions is the iconic Appleton Estate located in the Nassau Valley,” Bennett continues. “Visitors can sign up for an interactive guided tour of the 265-year-old estate to get a behind-the-scenes look at the ‘cane to cup’ distilling process and taste Appleton’s signature aged rums. For true rum enthusiasts, we also host an annual Jamaica Rum Festival in Kingston each year. The multi-day event includes rum tastings and workshops with local distilleries and expert mixologists, plus food vendors and live musical performances.” 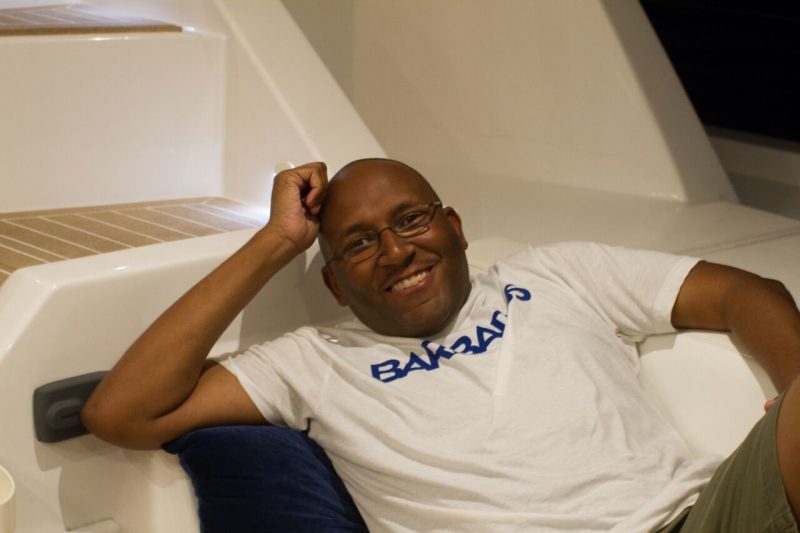 Peter Mayers says his country had something of a head start when it comes to producing rum and that’s served it well.

“Those who have visited Barbados know that our rum is not only delicious but steeped in history, and we are arguably the best producers of this spirit,” he says. “The world’s oldest rum was founded in Barbados in 1703, Mount Gay.  Truthfully, I am not much of a drinker and imbibe once in a while, so when I do have something it is most certainly the Mount Gay brand.  I especially love Mount Gay XO over ice and a slice of lime. When my sweet tooth takes over, I have Barbados’ most well-known beverage – rum punch.  I recommend Cocktail Kitchen’s spin on the famous cocktail.  Visitors will love sipping on it while taking in the views of St. Lawrence Gap right at the shoreline of Dover Beach in the south of the island.” There are plenty of watering holes on Barbados but Mayers singles out Braddies Bar in Dover as his preferred spot.  “It is a rumshop that is known to be a locals’ haunt, but is welcoming to visitors who have taken in the delicious food, music, and overall Bajan vibe. Local Member of Parliament Santia Bradshaw is the owner, as well as being a lawyer and music manager.  Therefore, Braddies certainly carries the eclectic nature that Santia embodies – there are local karaoke nights, a large- sized entertainment area to play pool and dance, and her chef makes the most mouthwatering fishcakes that have me coming back at least once every trip.  They have worked particularly well with us for our Visiting Journalist Program from Canada, which I can’t wait to resume.”

Mayers says those visiting his island will have endless opportunities to familiarize themselves with local rum. “Because our heritage is steeped in the rum product, we have many opportunities for visitors to explore rum beyond the hotel bar. Mount Gay offers tastings and tours at their facilities, and customized experiences that include food and rum pairing dining for couples or groups.  A truly unique experience is visiting St. Nicholas Abbey – this is one of the remaining Jacobean mansions in the Western Hemisphere, and one of the few distilleries of its kind in the Caribbean, employing the traditional pot still method and creating the finest cognac-style rum.  The Abbey is renowned for being a plantation and distillery positioned beside Cherry Tree Hill.  Its tours of the grounds and the recently created Heritage Railway make it a memorable visitor’s experience.”

There will come a time when the coronavirus pandemic ends and Barbados bars will again be hosting large numbers of foreign tourists enjoying rum punches, a development that naturally can’t come soon enough for Mayers.

“I am anxious to toast to the safe and successful reopening of the Barbados product for our visitors and local community,” he says.”Visiting a rumshop or rum distillery is truly one of the most Bajan experiences a visitor can have beyond the beautiful beaches of our island. I hope to see our Canadians at Braddies Bar soon enough!”

Update on the state of global tourism