Yoga can be an (underwater) class act in Grenada

Scubasana makes a splash in Grenada

Tiffany Geer suggests divers consider using what she says can serve as an ancient antidote to help offset any possible unease they may have about the air apparent while underwater.

Geer, who owns Aquanauts Grenada in Grenada and is both a PADI dive master and a certified yoga instructor, touts the benefits of her Scubasana underwater yoga course for those who wish to relax their breathing underwater and thereby extend their time beneath the ocean’s surface.

The course is three half days, with Scubasana classes held in the open ocean at depths of up to 18 meters and lasting up to an hour or until participants run low on air. Also included are on-land yoga sessions, presentations given on land, pool training, and four open water dives.

“Air consumption is a real art. It’s amazed me how much practicing yoga and breath work has helped with my personal air consumption rate with diving,” Geer says of two activities that stress the importance of relaxed breathing. 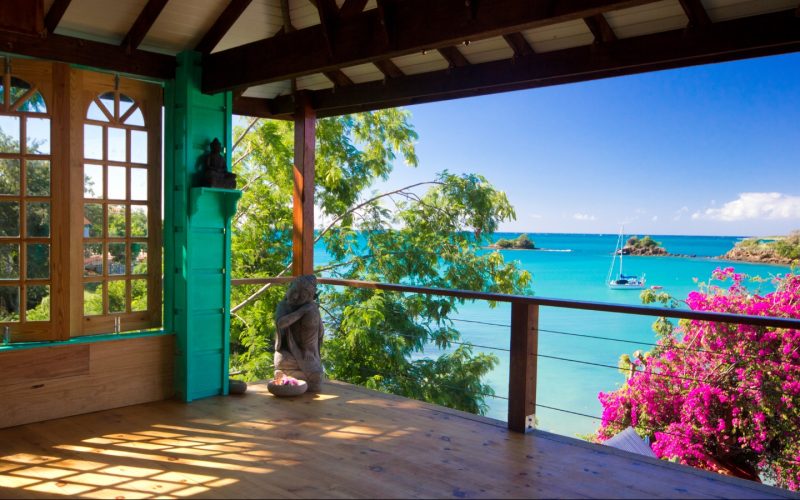 “I first fell in love with yoga on land then my family introduced me to scuba diving,” Geer reports. “I immediately noticed the commonalities between the two and soon enough my brother and I were messing around with practicing yoga flows on the bottom of the sea floor in San Diego, CA. I traveled to Bonaire and took a yoga dive course called Yoga Diver, where I further studied the commonalities between scuba diving and yoga. In love with both practices, I made a commitment to myself that I’d share it with others. As a certified assistant instructor with SSI, I’m able to share the Scubasana course with other like-minded divers. During the Scubasana course, you learn how the eight limbs of yoga correlate to scuba diving and physical practices to bring the limbs to life. By performing certain asanas (postures) before and after diving to alleviate physical pain associated with diving, practicing breath work exercises to better your buoyancy control, and meditating to create heightened focus and mindfulness you can enhance your experience underwater. Yoga is about unity with the universe and by practicing the ancient art you can become one with the underwater world.”

The classes  were cited by the Grenada Tourism Authority’s Renee Goodwin as an intriguing option for yoga enthusiasts during a recent tourism authority webinar on health and wellness options on the island. 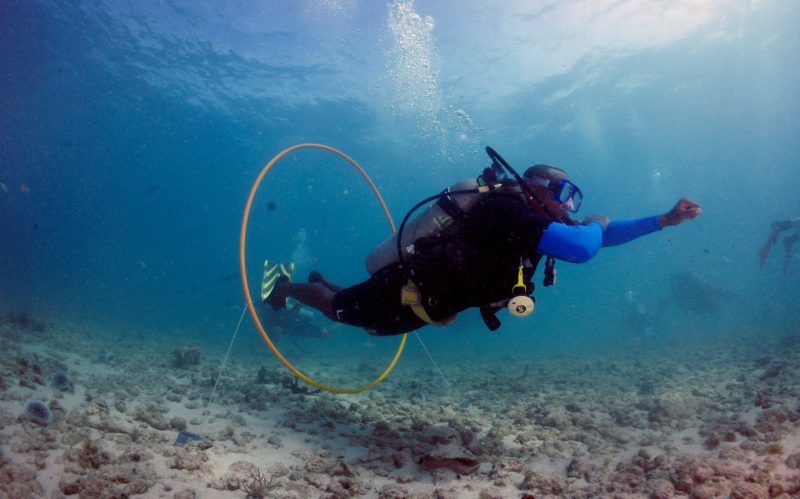 Geer – whose firm believes in “adaptive diving and making the ocean accessible to everyone” — says Scubasana courses largely use hand signals to communicate with students, who have to be certified divers. Dive slates are also used.

Performing yoga in the ocean is “fairly easy,” she says, even though the “weightlessness of the ocean can add its own challenges to perform underwater postures, which makes it even more fun. It empowers you to become more in tune with your breath, which is one of the benefits of the practice. Other benefits received are deeper relaxation, heightened awareness, extended bottom time while diving due to reduced air consumption, preservation of the natural environment through neutral buoyancy, and increased enjoyment while scuba diving.

“Many divers may not realize it, but some of the aspects they love about diving correlate with yoga,” adds Geer, who studied yoga in its birthplace of Rishikesh, India. “Scuba diving can be viewed as an underwater meditation. A seated-silent mediation may not be for everyone, but an underwater meditation of bringing awareness to the various species around them is another great form of meditation.”

Non-divers vacationing in Grenada wanting to try Subasana — the name of which originated when Geer and her scuba instructor brother were “goofing around” in an underwater yoga photoshoot  and he “came up with a sweet name. It’s stuck ever since and we’re stoked to be sharing it with others” — can take a certification course with Aquanauts Grenada and then opt for the yoga classes.

“We’d be happy to support you in enhancing your underwater explorations,” continues Geer. “73% of this planet is covered in water so why not take your adventures below the surface!? Scubasana is a great way to learn about your impact in the world and embrace techniques to reach your full potential.

More information can be found at aquanautsgrenada.com.