It’s 8:00 p.m. in a crowded taqueria in Mexico City, and plastic plates filled with assorted tacos and gringas are being passed amongst a group of 21 strangers about to embark on a 16-day journey across central Mexico and the Yucatan, ending in Tulum and Cancun. It’s an exciting time.

This is the start of my third ‘Roamies’ trip, a new travel style from G Adventures and Hostelworld for 18-35 year olds interested in small-group travel to adventure filled destinations, centered around unique hostel stays and social experiences.

We’re all nattering away while tucking into some of the best pastor tacos I’ve had in my life, which would explain the queue stretching half a block outside Taqueria Arandas. Our Chief Experience Officer (CEO) or guide, Bianca, who is originally from Cancun, Mexico has the low down on the best places to find cheap, authentic Mexican food in the city – and everywhere else on our itinerary, for that matter.

We’re about five minutes away from our first hostel of the trip, Mundo Joven, which is perfectly situated just behind the beautiful Metropolitan Catedral, overlooking the historical centre. It’s an ideal base to explore the best the city has to offer. We finished our first night together as a group with some margaritas at the hostel’s rooftop bar. 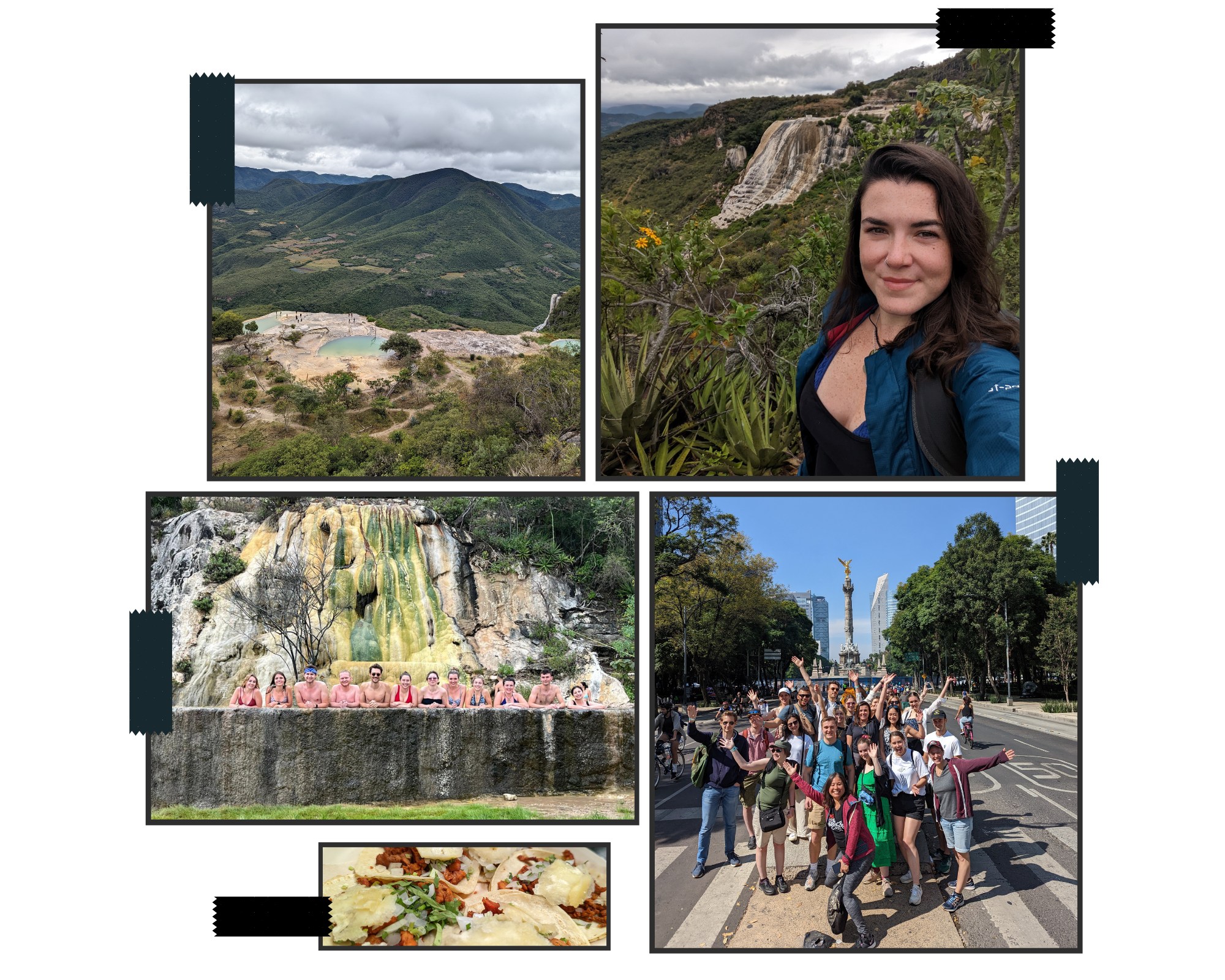 Over the next 16 days we would be venturing to incredible towns including Puebla, Oaxaca, Puerto Escondido, Valladolid, Tulum and Cancun to get a taste of true Mexican and Mayan culture. We would be ticking off big bucket list items like swimming in cenotes, and visiting one of the New Wonders of the World — Chichen Itza in the Yucatan region — as well as joining a Mayan family near Cancun to make a traditional meal of ‘pollo pibil’. All this while staying in some incredible hostels with swimming pools, parties, tours, cocktail bars and beach trips. There’s a reason this trip is called ‘The Most Mexico’!

Our two days spent in Mexico City were filled with great food, tours through traditional Mexican markets and learning about the preparations underway for one of the biggest festivals on the Mexican calendar, Dia de Los Muertos or Day of the Dead, which was just around the corner on November 1-2.

On our second day in Mexico City, we went to one of the big ‘must-dos’ for the capital — a trip down the canal in Xochimilco to see the floating markets, which is so unique. Our group was split between two ‘trajineres’ – brightly painted, flat bottomed wooden boats — perfect for parties.

We floated slowly down the canal and there were plenty of vendors on boats selling everything from corn on the cob to carpets. There are even mariachi bands floating down the canal ready to hop aboard to serenade passengers making it  an unmissable experience. 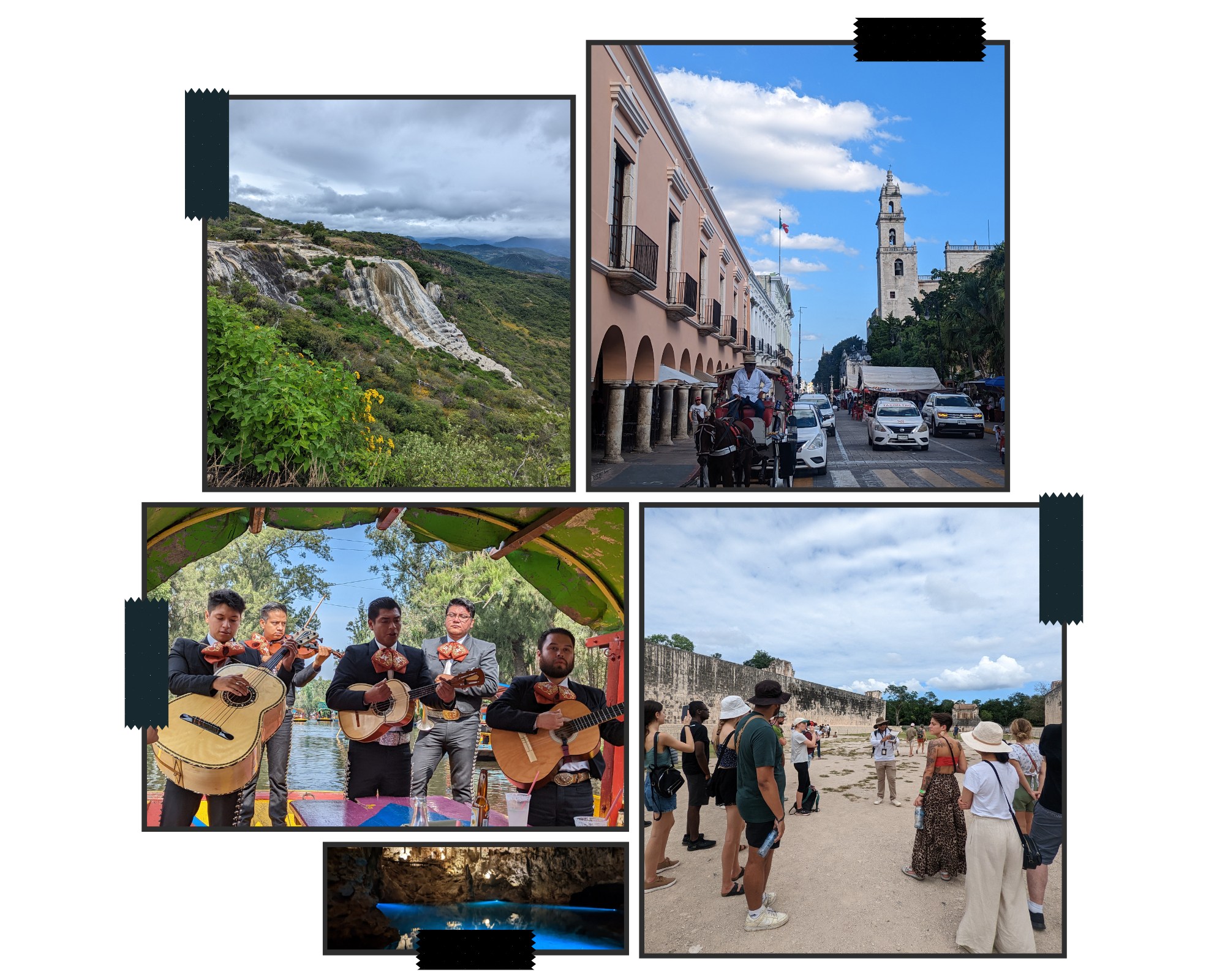 After going through the highlights of the trip with my fellow ‘Roamies,’ a couple of places really stuck out as major winners: Oaxaca and Puerto Escondido.

Oaxaca really lives up to that colourful, vibrant and life-filled image you probably have conjured up in your mind when you think about what a traditional Mexican town looks like. The streets are lined with stunning multi-coloured buildings, and some of its landmarks are made from this beautiful sage green coloured stone, called cantera.

During our visit here we explored the streets, sampling great food and some of our group headed to see the famous petrified waterfall, Hierve El Agua about a two hour drive outside the city. Once I heard it was one of only two of these kinds of curious rock formations in the world, I had to see it. You can find the other petrified waterfall in Pamukkale, Turkey.

And it’s exactly what it says on the tin, a huge rock formation that looks like someone froze a waterfall in time. It’s formed by the build up of calcium carbonate in freshwater depositing over time — similar to how stalactites form.

After you check out the ‘waterfall’ there are some springs on a cliff overlooking the famous site where you can take a swim. 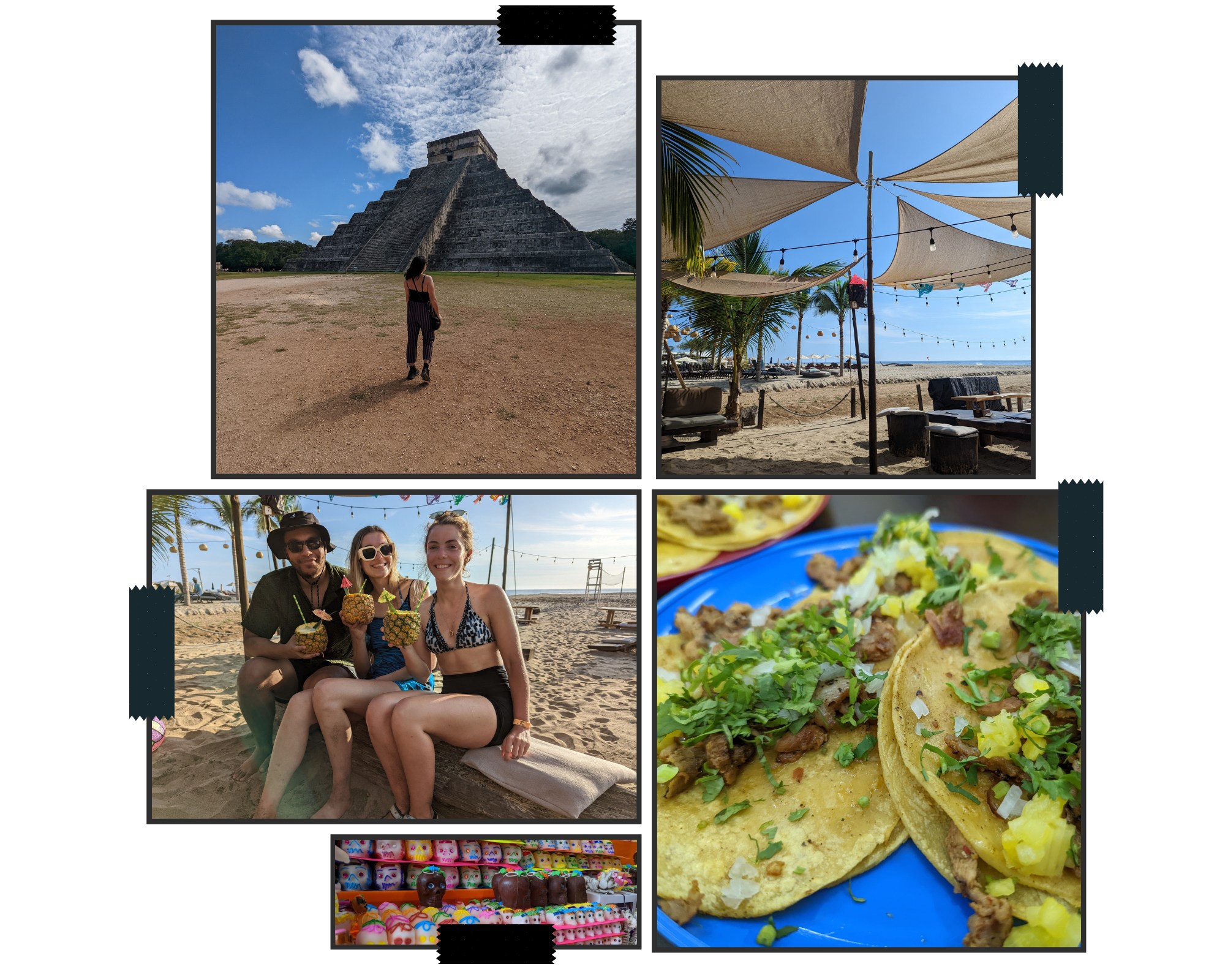 Our Oaxaca stay included a chance to experience the preparation of some traditional dishes like mole, tamales and tlayudas alongside some mezcal tasting – Oaxaca is said to be the birthplace of Mezcal, a delicious, smokey spirit made from agave. It’s like tequila’s big brother. We also had a go at trying to make our own corn tortillas, and trust me, it’s not as easy as it looks.

Our next port of call was the chilled out surfer town of Puerto Escondido. There was a noticeable rise in temperature arriving in Puerto Escondido after our days traveling from Mexico City to Oaxaca. During our two days here, some of our group opted for surf lessons or yoga classes, but it was also an ideal place to find a great coffee shop. I hung out at Elephant Garden — a very relaxed cafe about a two-minute walk from our accommodation.

After a couple of days spent along Mexico’s Pacific beach coast line, we were off again on a flight to Merida in the Yucatan region where we would see the first of many cenotes included in the tour. Mexico is famous for its incredible, swimmable sinkholes or ‘cenotes’, they’re formed after a ceiling has collapsed in a cave and are filled with exceptionally clear, fresh water. 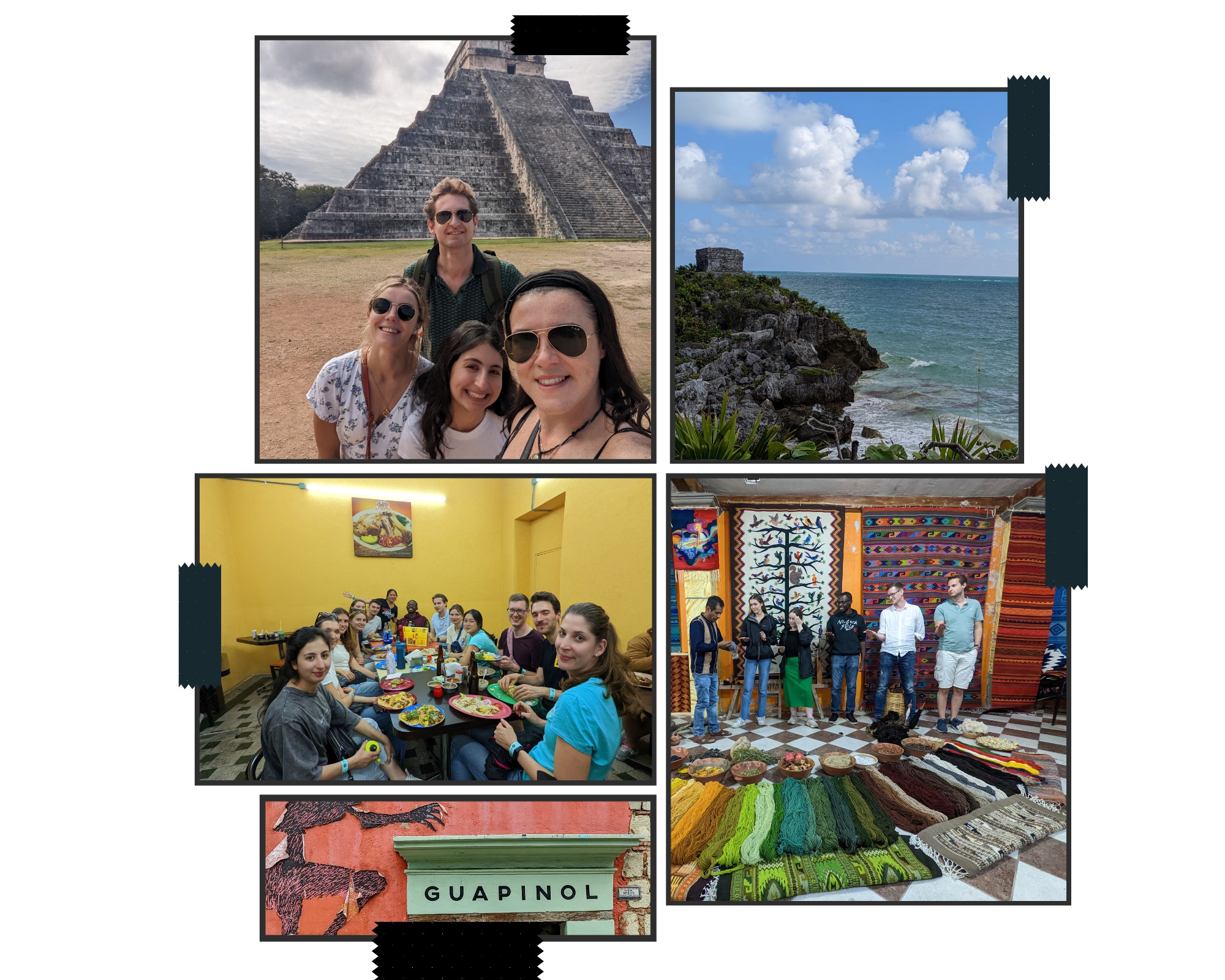 There were several opportunities for a cenote swim on ‘The Most Mexico’ trip. First up was a visit to the cenotes in Cenotes de Santa Barbara, just a short drive from the town of Merida. Here, you take a bicycle and cycle between three stunning cenotes, Cenote Cascabel, Cenote Chacksikín and Cenote Xooc’. They each have incredible aquamarine, blue water — perfect for swimming in while surrounded by ancient stalactite and stalagmite formations. If swimming in a cenote isn’t on your bucket list, it should be!

While visiting Merida, we stayed in Hostel Nomadas, one of the Che branded hostels. A very fun hostel built for partying, but it also had laid back vibes during the day, which is a difficult blend to get right, as those who have stayed in many a hostel will tell you. There were large, spacious dorm rooms with comfy beds and a swimming pool adorned with fairy lights. It’s sister hostel in Tulum — our penultimate destination before Cancun — was very much a fun, party hostel too. They offer a snorkeling tour to swim with turtles and fun themed nights with karaoke, Argentinian BBQ, beer pong and pizza night.

It wouldn’t be ‘The Most Mexico’ without stopping to see the famous wonder of the world, Chichen Itza — also in the Merida Yucatan district. It was extraordinary to actually experience this place. It’s always one of those Instagram favorites for travelers to the region but actually learning about the history and the extraordinary efforts the Mayans went to to create the main pyramid structure at the site, El Castillo, blew us all away. 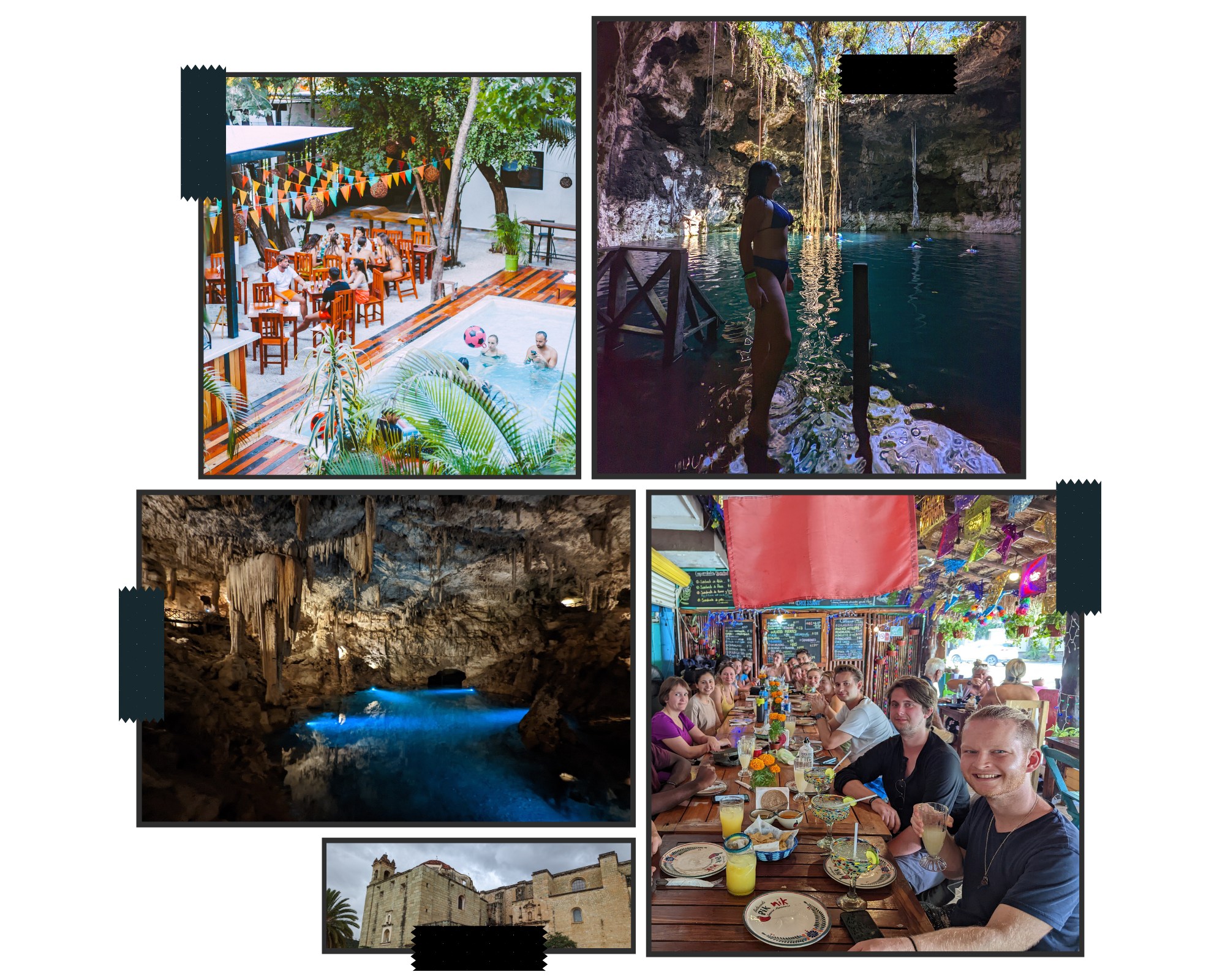 One of the highlights of our tour was learning about the curious acoustic phenomenon featured in the pyramid by the Mayans that you can still experience today. By clapping at the base of the pyramid you can hear a curious echo. The echo is identical to the warble of the quetzal bird, an animal sacred to the Mayans.

We stayed in the charming town of Valladolid after our day spent experiencing Chichen Itza, in Valladolid 48 hostel. About an hour outside Valladolid is the Zazil Tunich cenote which our group had to ourselves for an evening — there is something magical about swimming in a cenote at night.

Our last days of the trip were spent relaxing in the ultimate beach resort destination of Cancun or ‘the Miami of Mexico’. Here we stayed in the Selina hostel in the Cancun Hotel Zone which had a swimming pool overlooking a lagoon where you were guaranteed to catch the best sunsets. There was plenty on offer here too like a wellness centre, a coworking area, yoga deck and a great cocktail bar. There are plenty of day trips to experience while staying in Cancun, but considering Selina is just a stone’s throw away from a perfect white sand beach with turquoise water — what else could you really want? 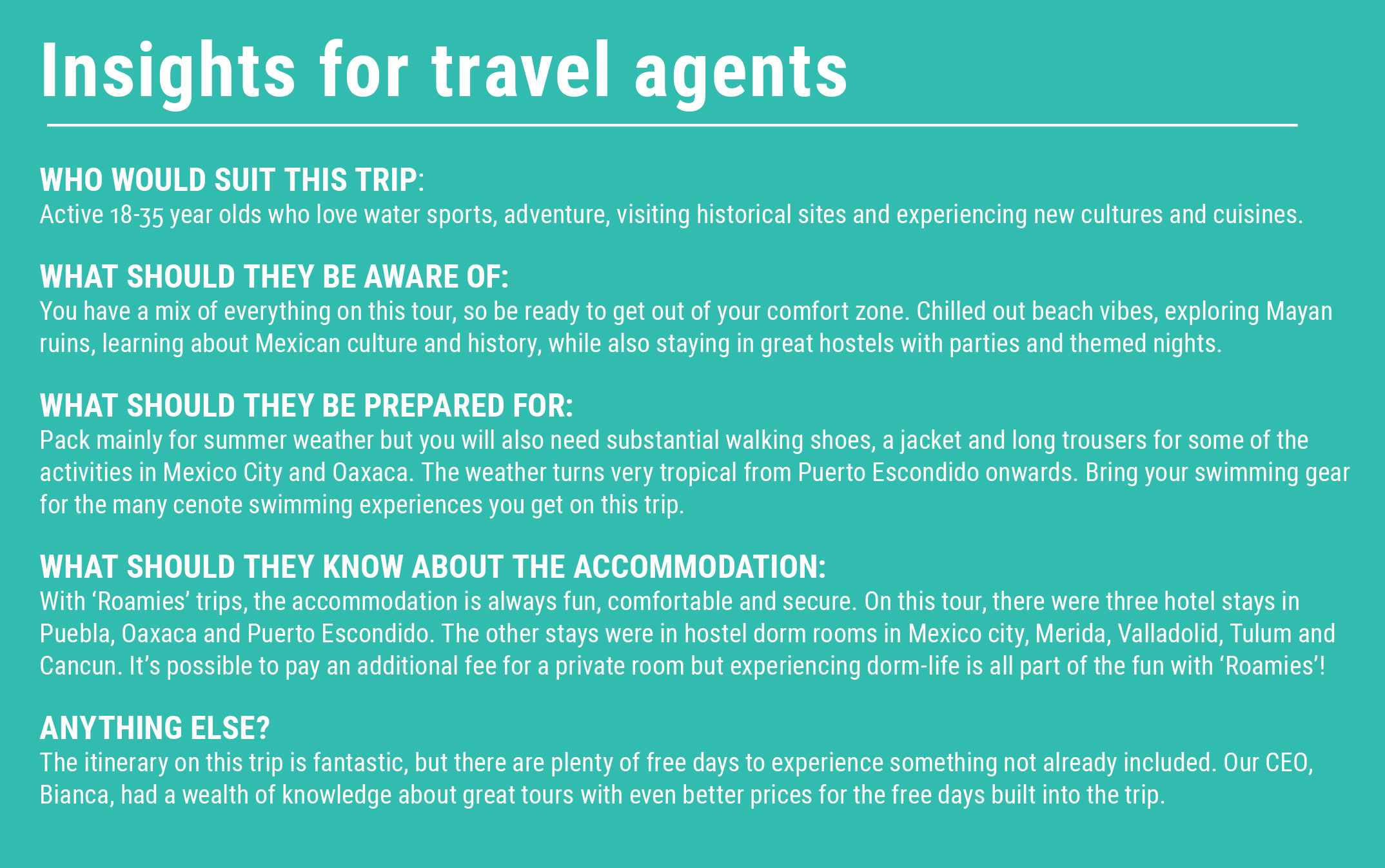