Upcoming Cuban hotel will cater to those who enjoy stogies

There are fears it could harm travel recovery

Don’t expect any non-smoking rooms to be available in a hotel now being created in the Cuban community of San Juan y Martinez.

The as-yet-unnamed hotel is expected to open in the fall in a Pinar del Rio community that is considered the very heartland of Cuban tobacco country and the cigar-themed retreat will be a clear reflection of that, says Jose Aguilera Hernandez, who promotes Pinar del Rio tourism.

A cigar-themed hotel isn’t a first for Cuba, with Havana being home to the Condé de Villanueva but Aguilera Hernandez says the  San Juan y Martinez hotel will be the first such property outside Cuba’s capital and its setting in a region of tobacco farms and factories will make it particularly appropriate.

“Tourists can come here and smoke their cigars in the hotel,” he notes.

The two-story yellow structure was once owned by a wealthy American and is described as “eclectic colonial architecture.”

A cigar lounge is expected to be among the features.

The actual structure is being preserved, but spring was seeing workers gut much of the interior in preparation for the conversion into an upscale hotel.

Famed area tobacco farmer Hector Luis Prieto — who’s won awards from the Cuban government for tobacco production — is welcoming the upcoming lodging, praising it as a “good project for the community.” 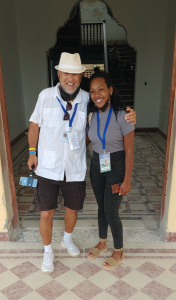 Prieto is confident that those who puff away on cigars while overnighting at the hotel will find their stays enjoyable.

“Where there’s tobacco, there’s a good atmosphere,” he states.

Tourism officials say Pinar del Rio often attracts cigar enthusiasts but they tend to take day trips to the region from Havana and the upcoming hotel may convince some of those visitors to overnight.

“Smokers and non-smokers can come and experience this beautiful thing,” Aguilera Hernandez states.

Meanwhile, Cuban tourism minister Juan Carlos Garcia Granda says the hotel’s setting ensures it will be popular with those who enjoy puffing on a cigar.

“This is going to be special because it’s in the land of tobacco,” he states.

Journey to the Stars with Fiji’s Nanuku Resort