Travel near and far with these virtual experiences

Just because you’re grounded doesn’t mean you can’t escape to destinations near and far. Here are just a few ideas to pass the time and keep the household entertained while social distancing. 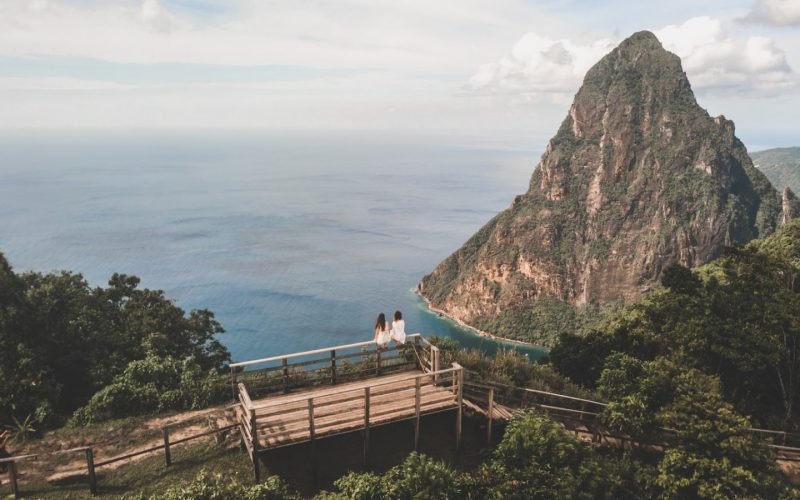 As the world adjusts to the new reality of life under self-quarantine in the midst of the coronavirus pandemic, the Saint Lucia Tourism Authority (SLTA) is inviting travel agents and suppliers to escape virtually for “7 Minutes in Saint Lucia” with a new social media series twice per week on Instagram.

While travel may not be possible at this time, travellers can virtually experience Saint Lucia from the comfort of their homes.

“By creating the ‘7 Minutes in Saint Lucia’ social media series, our aim is to virtually share Saint Lucian culture and natural beauty in an authentic way while people stay safe at home, to keep in touch with future visitors and our valued travel agents — hopefully providing a bright spot in their days,” said Minister of Tourism Dominic Fedee. At the designated times, go to the @TravelSaintLucia Instagram page and click the top of the feed with a play button and colourful ring around it to join the live.

The weekly series kicked off with yoga at the world-famous Pitons in Saint Lucia.

Here are the upcoming listings:

Live virtual dance session to get you up and moving with one of the hottest Disc Jockeys in Saint Lucia, Hollywood HP. Join the jam session spinning the hottest Reggae, Dancehall and Soca hits from the comfort of your home, at a special evening time.

Free your mind with LIVE guided meditation with Janelle from @YogawithJa, from the sandy beaches of Saint Lucia. Let the calm breeze of the Caribbean Sea open up all of your senses for a virtual escape as we connect, ease stress and spread positive energy.

Additional planned activities in the series include a breath of fresh air hike at Tet Paul Nature Trail, guided meditation amidst the Saint Lucian landscape, cocktail crafting with local rum, cocoa tea making with a local chef and lessons about wellness benefits of plants from a local herbalist. The last few weeks have felt a little bit like a roller coaster ride — so you may as well get the thrills that come with it. Those stuck self-isolating or working with kids at home can escape to Canada’s wonderland from the comforts of the living room.

Take a virtual ride on 16 coasters, 11 thrill rides and seven family rides with the amusement park’s first-person ‘point-of-view’ (POV) videos on Youtube. Kids of all ages may try this experience, even though they may not, technically, be tall enough to ride in real life.

Here’s how to set up your virtual ride:

With travel “on hold” for most, tourism officials in Berlin, Germany are inviting “travellers” to visit via online measures.

They say it is again time for some excitement and, as always, Berlin offers just what it takes — online clubbing, classical music and culture.

The following are three ways to dive into Berlin from the comfort of home:

The Philharmonic Orchestra Berlin — one of the best and most applauded orchestras in the world — is closed until April 19 (or further notice) to help contain the coronavirus; however, classical music fans can enjoy beautiful and humbling classical music virtually and free of charge in the Digital Concert Hall. Vouchers and more information available here. Further live streams from Berlin’s stages here.

Solo clubbing: Live from Berlin right into your living room

For an über-social city known for its legendary night life, the temporary shut-down of the entire club culture might seem a tough challenge. But, no worries: Keep dancing, as Berlin declares it’s support and solidarity by getting the biggest digital club to your home. United We Stream in alliance with ARTE Concert is putting its whole spectrum and diversity on one channel.

Visitors can now explore 35 rooms of Berlin’s Bode Museum virtually. The Bode Museum is situated at the tip of famed Museum Island, a UNESCO World Heritage site and one of Berlin’s top tourism sites. The virtual tour seamlessly stitches together 62 photographs, each providing a 360-degree panorama. The final product captures nearly the entire ground floor of the museum as well as a great deal of the first floor. The virtual tour also provides information on each of the 850 photographed sculptures and paintings, and over 300 links to the online database of the national Museums Berlin.

Visit the Sunshine State from your living room

The longer we are cooped up at home, the greater our wanderlust. Escaping the stress of the day-to-day – especially now – through TV and movies is a wonderful and safe way to travel the world… and it just so happens that Florida sets the scene for a variety of films.

From TV hits such as ‘Dexter’ and ‘Miami Vice’ to many classic movies, here are a few ways to “visit” the Sunshine State from your couch and get inspiration for future trips. In the classic film ‘The African Queen’ (1951), Katharine Hepburn’s character is offered safe passage on a boat of the same name by a dissolute steam captain (Humphrey Bogart). Set during WW1, the two spend most of their time fighting each other rather than the Germans, and time alone on the river leads to love. Of particular note for film tourists, the iconic vessel from the production was discovered in Ocala, Florida in 1982 and completely restored and refinished, and today visitors to Key Largo can set sail on a 90-minute tour.

Florida’s north-east coast is full of action! In ‘Lonely Hearts’ (2006), a neo-noir film based on the true story of the notorious “Lonely Hearts Killers” of the 1940s, John Travolta plays a detective chasing the infamous duo (played by Salma Hayek and Jared Leto). The film was partially shot in downtown Jacksonville and on the idyllic neighbouring destination of Amelia Island.

Off the beaten path, well-known film locations also await visitors. Though set in “Pennsylvania,” the movie ‘My Girl’ (1991) – starring Anna Chlumsky as Vada Sultenfuss and Macaulay Culkin as her best friend Thomas – was actually shot in Florida, and the Sultenfuss home (and funeral parlour) can be found at 555 East Stanford Street in Bartow, located between Orlando and Tampa. The remake of one of the most famous gangster stories of all time, ‘Scarface’ (1983) was not filmed in Chicago like the original but in Miami, where Cuban refugee Tony Montana – played by Al Pacino – becomes a mafia boss. From the famous chainsaw scene on Ocean Drive to the iconic Fontainebleau Miami Beach hotel where Manny (Steven Bauer) gets slapped in the face after flirting with a girl by sticking his tongue out at her, Florida is featured throughout. In fact, this famed hotel also appears in the James Bond film ‘Goldfinger’ and ‘The Bodyguard’ starring Whitney Houston.

“Good morning, and in case I don’t see ya, good afternoon, good evening, and good night!” Every morning, Truman Burbank (Jim Carrey) greets his audience… without knowing that he even has one. Rarely has there been a more suitable location for a film than Seaside – located in northwest Florida, between Panama City Beach and Destin – was for ‘The Truman Show’ (1998). The town itself was the first planned community in the State, and today it’s a resort town consisting of summer homes, including Truman’s own house (proudly labelled ‘The Truman House’) found at 31 Natchez Street.

So sit back, relax and explore the sunny shores of Florida from the comfort of your couch… and when the time is right, experience it for yourself.

Jammin’ Jamaica: Every Little Thing is Gonna Be Alright

In a time of uncertainty and social distancing, it’s important to try and find new ways to lift your spirits and bring a sense of normalcy back into your life. For many, travel is a way to refresh the spirit and experience the best parts of a culture.

Jamaica hopes to ease your worries and transport you on a virtual island getaway with a specially curated Spotify playlist featuring the country’s top musical legends. The “Every Little Thing is Gonna Be Alright” playlist reminds us to keep our heads high and attitude bright with melodies from Bob Marley, Jimmy Cliff, Beenie Man and many more.

Check out the irie vibes here. Getting cabin fever? If so, the following virtual tours from New York City may help.

Despite widespread closures and cancellations related to Covid-19 in NYC, there are still plenty of ways to explore the five boroughs while socially distancing.

Check out nine amazing street art murals around this city. The Big Apple is also known for being the canvas of great street artists – from Kobra and Banksy to Keith Haring, visit the locations of these beautiful artworks.

Broadway Cares has put together a special encore series of two dozen or so recent star-studded performances from Broadway Backwards where genders are swapped on famous show tunes.

Take advantage of immersive 360-degree videos of The Metropolitan Museum of Art’s most beloved locations, including The Met Cloisters, The Met Breuer and the Fifth Avenue museum’s Temple of Dendur and arms and armor galleries.

Finally, at the New York Botanical Garden online, visitors can explore recent installations, browse horticulture lecture videos and stay up to date with its latest news.