Karate enthusiasts invited to hone their skills in Japan

Those involved in promoting Japan to tourists are inviting karate enthusiasts to undertake at least part of their schooling in the home of that martial art, which has reappeared in the spotlight recently thanks to the hugely popular Netflix series Cobra Kai, a decades-later continuation of the heartwarming 1984 movie, The Karate Kid.

Toronto resident Shin Kawai, president of Japan Communications Inc. and who has been teaching karate for 40 years, much of that in the Ontario capital, says those interested in learning karate will be welcomed in Japanese karate schools, or dojos, saying there is no “entrance test” to be admitted.

Kawai — who has taken a group of Canadian students to Okinawa to study there — adds that those who don’t speak Japanese needn’t fear language barriers in Japanese dojos, adding that, “Like music, you learn karate by watching and repeating your teacher’s movements. At the dojo, you will pick up a few essential words like ‘Mokuso,’ which means ‘To meditate.'”

Torontonian Adam Waxman, who is a member of the advisory board appointed by the commissioner of the Japan Tourism Agency and has visited Japan numerous times, agrees that not speaking Japanese isn’t a formidable obstacle to studying karate in that country.

“Traditional Japanese martial arts differ from other popular martial arts of today with respect to the regimen by which they’re taught,” he says. “There are rules and formal processes in each movement, like the stroke order of the Japanese writing system. That discipline and repetition is a quintessentially Japanese quality that helps maintain the social fabric of Japan.

“In many instances there is no English spoken. However, the emphasis is on ‘the doing’ of the exercise, and so one must observe intently.

“In Japan there is more exposure to the culture that produced karate, so the sense of discipline learned in the dojo may be more easily observed outside the dojo than would be possible in another country.” 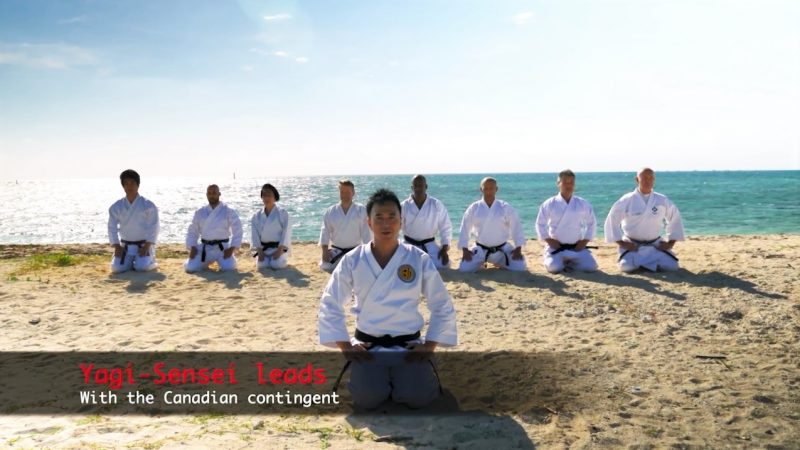 Toronto-based karate instructor Shin Kawai led a group of Canadian karate practitioners to train with eighth dan sensei Akihito Yagi in Okinawa. Two episodes were made about the trip and aired on CTV and Fairchild TV this year.

But how worthwhile is travelling across the Pacific for karate instruction when instruction is available in this country? Well, says Kawai, it can be very worthwhile.

“It depends on who are teaching,” he says. “You have a better chance to learn more authentic and traditional karate in Japan, but no matter how you are introduced to karate, as you pursue the ‘Karatek-do’ (way of Karate), eventually all of the karate students will arrive at the same place, where emphasis is not so much on beating and kicking and winning, but more on a spiritual journey, self-awareness and so forth.

“In Japanese history, martial arts have been always associated with Bushido (the code of the Samurai). Instead of emphasizing defeating your opponents, the spiritual aspect of the martial arts was important and essential. Martial arts in different forms (judo, kendo, karate) also had been introduced as part of the Japanese education system, teaching them proper manners, values, etc.”

That sort of life lesson recalls the counsel given to young Daniel LaRusso, the bullied teen mentored in karate by the kindly Mr. Miyagi in the original The Karate Kid, with the Okinawa-born Miyagi explaining to Daniel that he shouldn’t learn karate to fight but rather learn it so he wouldn’t have to fight.

Miyagi’s seemingly unorthodox style of teaching Daniel karate included memorable scenes where he had Daniel hand-sanding a porch, painting a lengthy fence and waxing cars, with the movements Daniel being told to use for those tasks having the unrealizing student learning how to defend himself from punches and kicks. His elderly instructor would famously mumble, “wax on, wax off” to his youthful protege while he was performing the arm-wearying chores.

Pat Norita — who played Mr. Miyagi — is long dead but other actors who portrayed The Karate Kid characters — including those who played Daniel LaRusso; Johnny Lawrence, one of Daniel’s tormentors; and John Kreese, Lawrence’s ruthless karate instructor — have resurfaced in Cobra Kai, which began appearing on TV screens more than 30 years after the movie. More Cobra Kai episodes are in the works.

Kawai gives Cobra Kai a passing grade, saying it “is made with sufficient understanding of what karate is, although some aspects are exaggerated and over-blown for dramatic purposes.”

Cobra Kai brings back a sense of nostalgia to Waxman for The Karate Kid, recalling how he and his friends would try to replicate the “crane” stance Mr. Miyagi taught Daniel. That had the young student learning how to unleash a kick while standing on one leg

Waxman praises The Karate Kid, citing its “valuable life lessons beyond physical self defence. My son has been introduced to karate and to muay thai (another Asian martial art). There is an obvious difference that has to do with respect, which is inherent in the movements of karate, as opposed to muay thai, which is simply aggressive.”

“Whether you are learning to become a sushi chef, or carpenter, traditionally, this is how things were taught in Japan. Although young people in Japan would have less patience, they can still relate to this traditional teaching method. In a karate class, teachers are not expected to talk about karate, instead you need to show the movements, and students, without asking too many questions, just need to repeat the movements the best way they can.”

But Kawai adds that his decades of being a karate practitioner has helped him realize that you won’t become proficient in the martial art by plunking yourself in front of a TV and watching the likes of The Karate Kid or Cobra Kai all day.

“Watching a karate movie alone will not teach you what karate is all about,” he advises. “Only ‘practice’ will help understand this fascinating art.”

Follow in the footsteps of The Crown in Malta