Spirit of the West Midlands 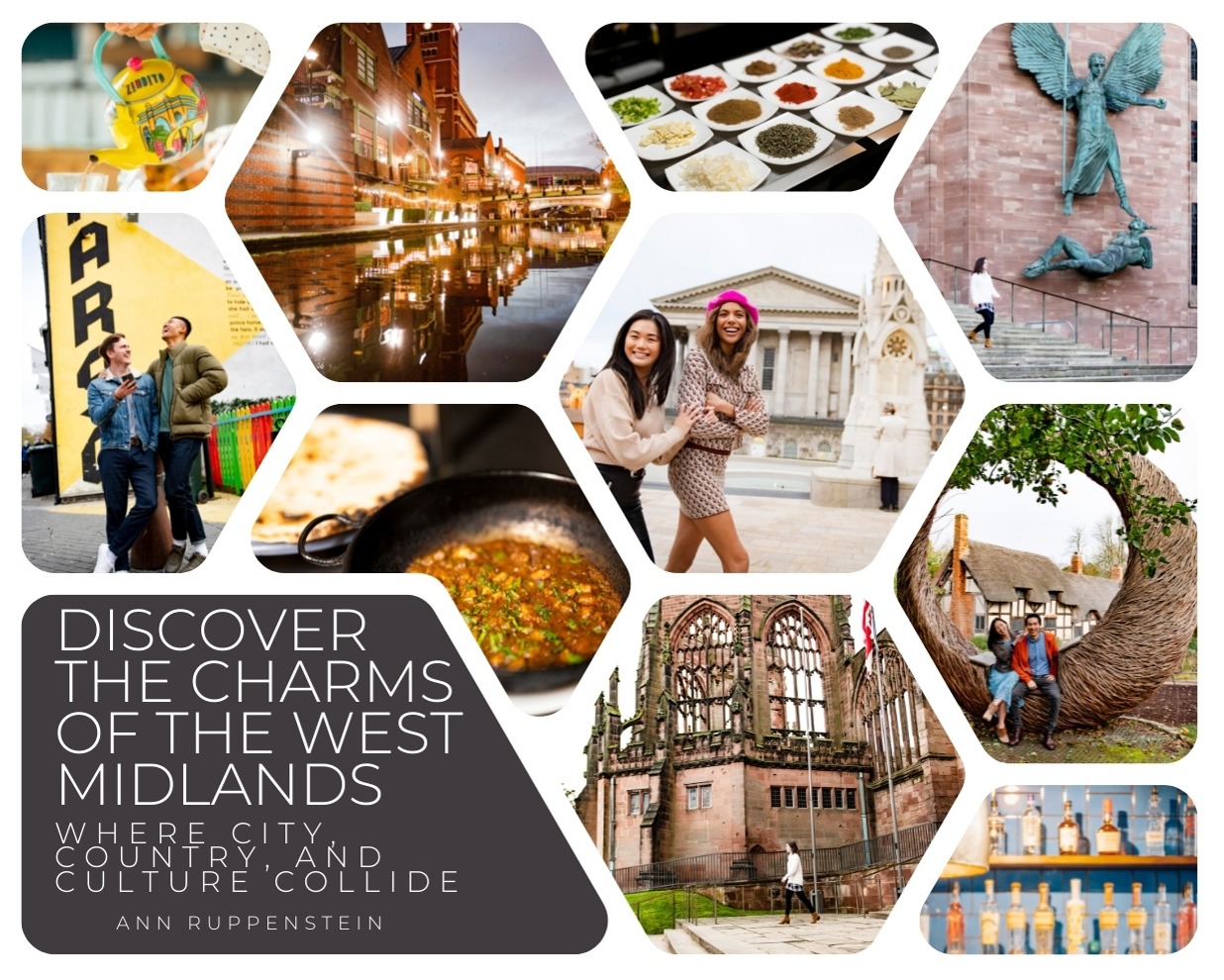 Walking through the streets of Coventry, tour guide Roger Bailey is eager to share a story that’s “a thousand years in the making.” The legend goes that Lady Godiva, a key figure in the history of the region, pleaded with her husband to provide a tax break for local residents.

“He said no, but she didn’t give up, she came back to him again and again, so many times he got so fed up, he decided to give her an impossible challenge, thinking she wouldn’t do it — ride through the streets of Coventry naked — and if you do this, I’ll lift the taxes,” explains Bailey. “We’re told she cares so much about her people, she decides to do the ride. Out of respect, everybody turned their backs, except for one, who we now call Peeping Tom.”

Although it’s debatable whether or not the incident actually took place due to a lack of official records, depictions of the scene remain today at sites like The Lady Godiva Clock Tower and The Lady Godiva statue.

Found in the West Midlands, which is known as The Heart of England, Coventry offers an eclectic blend of old meets new. The Coventry Cathedral, which was destroyed in a fire during the Second World War, is a must-see site. Newly reconstructed in 1962, the outer glass wall purposely reflects the ruins of the old cathedral, symbolizing hope for the future without forgetting the past. 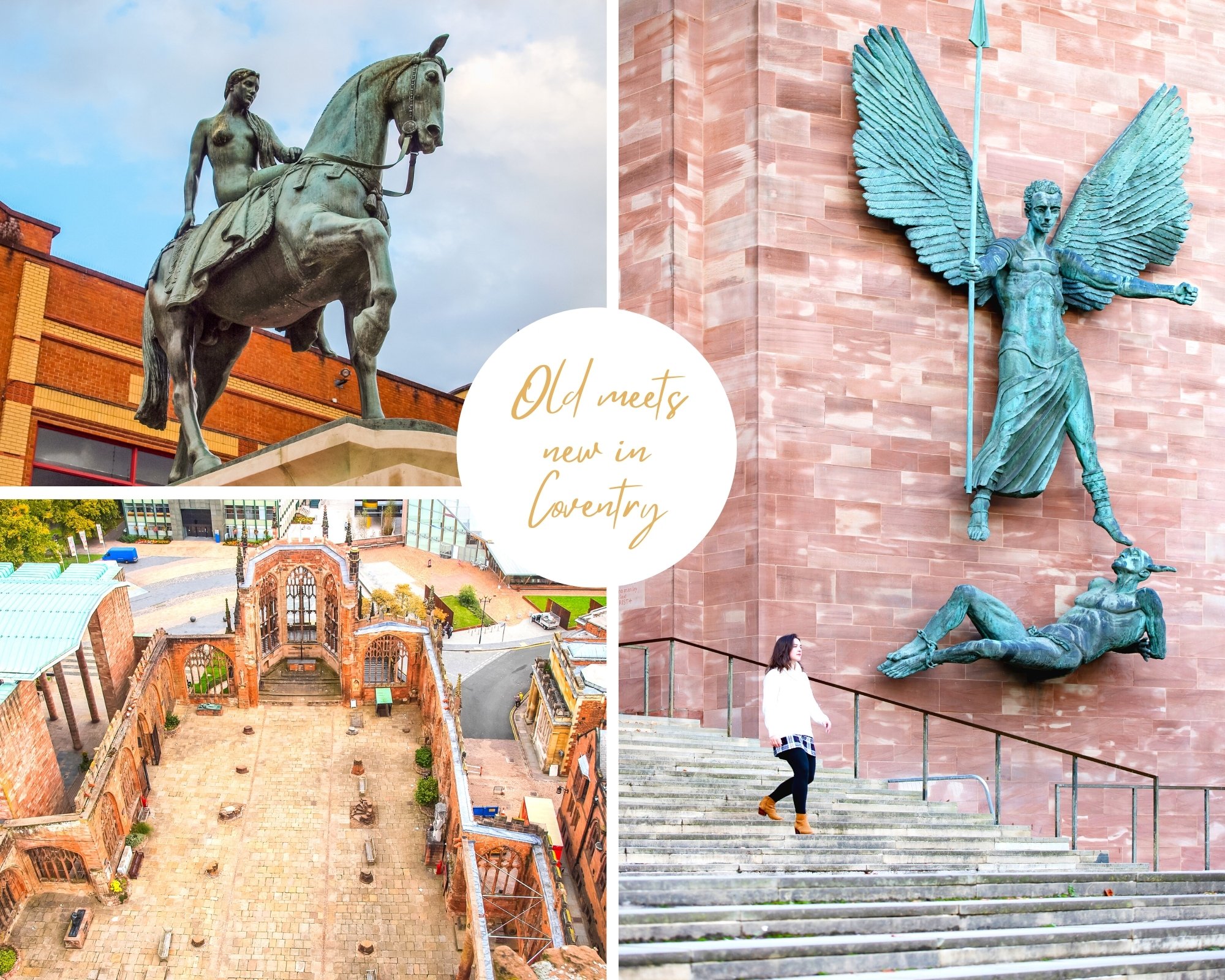 “It’s designed so that you’re looking at the old and the new,”  Bailey says, adding that the building is also home to a boulder from Bethlehem that’s used for baptisms.

The new cathedral also has Canadian connections with funds raised in Canada going to replace the organ lost during the fire. Those visiting will notice the icon of a Canadian Maple Leaf embedded on the floor of the entryway. Notably, Rachel Mahon, a Canadian, has also taken on the position of Director of Music at the Coventry Cathedral.

The interior of the new building is equally remarkable with massive displays of stained glass windows representing the soul’s journey through life into heaven lining the room and a large tapestry spanning 23 metres tall and 12 metres wide, that’s said to weigh about a tonne, as the backdrop.

While the city features many historical sites like St. Mary’s Guildhall, a well preserved medieval guildhall that provides a glimpse into life 600 years ago, it’s also budding with culture and creativity. 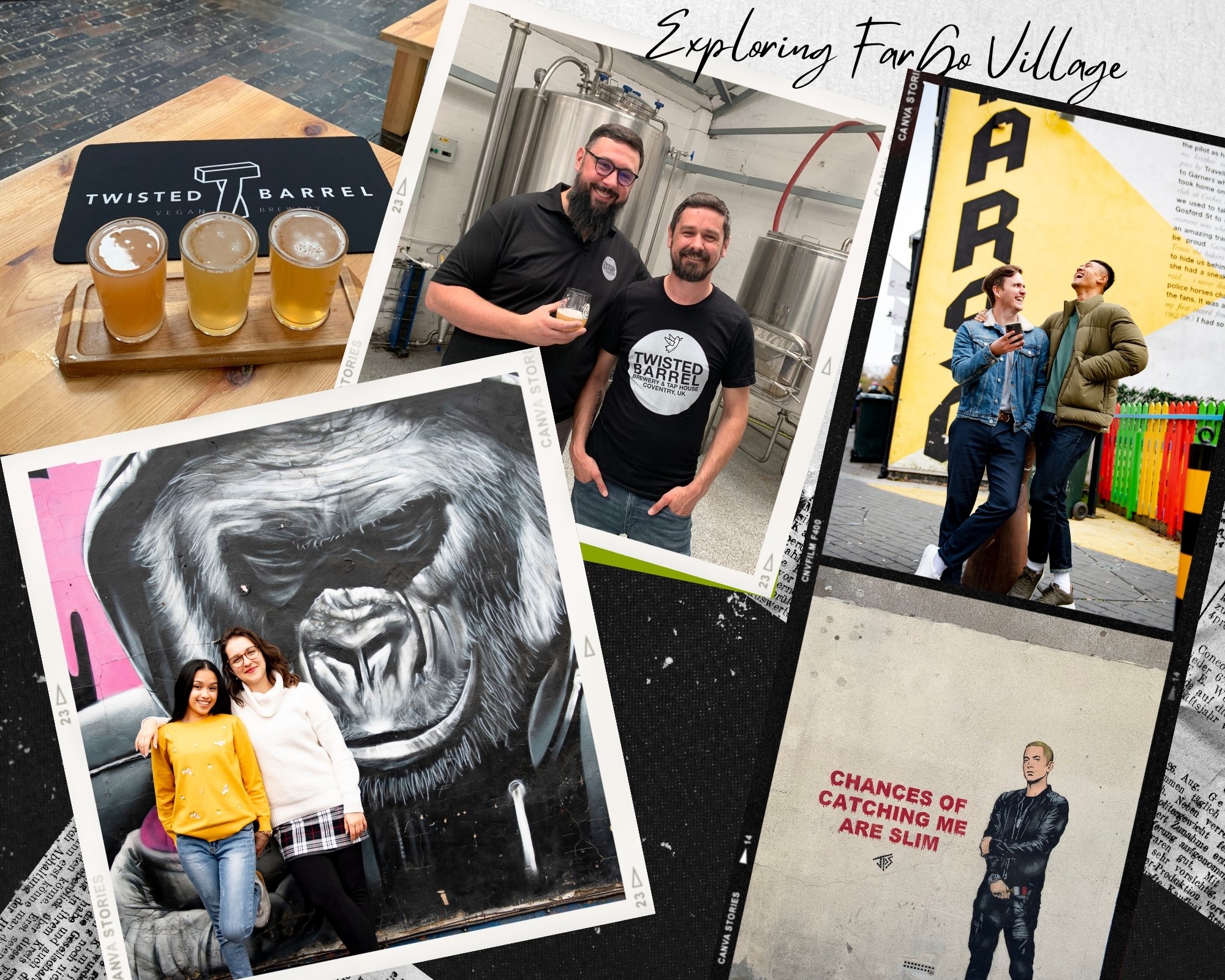 On the modern side, FarGo Village is a creative quarter launched in 2014 that’s loaded with sculptures and street art. It features independent shops, boutiques, art workshops, design studios, a brewery and a rotating selection of food vendors.

“It’s a really affordable way to try out something — it may have even started out as a hobby — to see if it can be something that supports you,” explains manager Holly Hewitt, noting that the concept took off from a handful of businesses to 40 different ventures. “A lot of the businesses have now moved into the bigger units. This month is wellbeing month where we encourage people in the community to come and meet us for a walk. So it’s not just about business, it’s about some wellbeing and a sense of community.”

Owned by Chris Cooper and Ritchie Bee, the onsite Twister Barrel Brewery is a tasty spot to sample a variety of vegan beer. The friends were inspired by the variety of beer available in the international scene, which they thought was missing back home.

So what exactly makes the beer vegan? Interestingly, Cooper explains that beer often contains Isinglass, which is derived from the dried swim bladders of fish, which the brewery doesn’t use.

“It’s used to clarify the beer,” he says. “Very, very few people realize it’s used in most beer. The second thing that a lot of breweries use, particularly in dark beers, is lactose because it’s used to get body, used to make it sweet.” 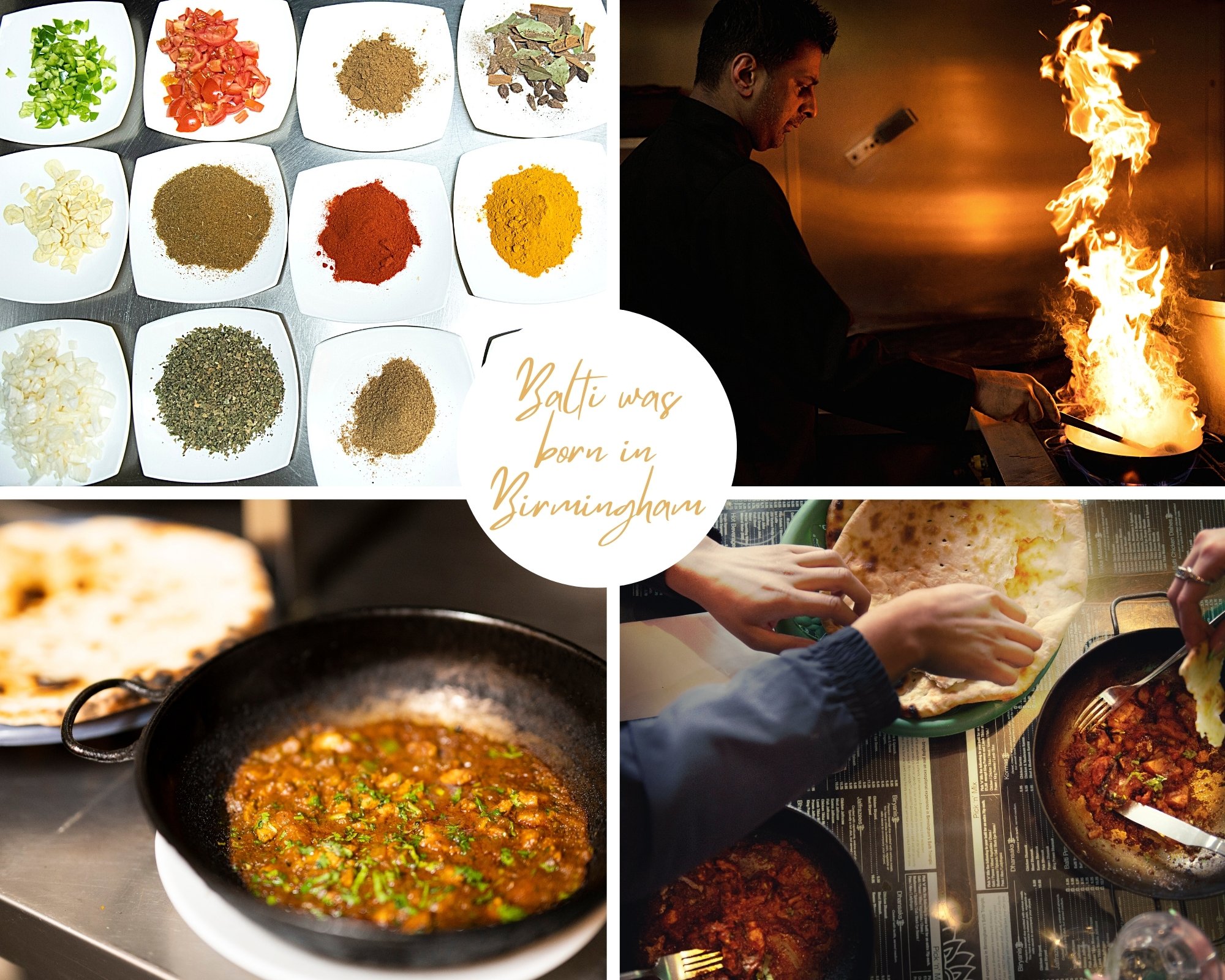 Having consumed over 2,000 Balti dishes to date — and counting — author Andy Munro is well versed in the art of a dish that originated in Birmingham, another buzzing city in the West Midlands. Invented during the 1970s when the city’s Pakistani residents created a fusion dish inspired by traditional Kashmiri recipes but cooked in a way that was more appealing to western tastes (for example with the meat taken off the bone), the resulting Balti helped put Birmingham’s food scene on the map.

“Balti has to be cooked and served in the same dish,” he notes, adding that the thin, pressed-steel wok called a Balti bowl was also invented in Birmingham.

Located in the Balti Triangle, a triangle-shaped neighbourhood in Birmingham, Munro says only about five authentic Balti houses remain in the area. One of these staples is Shababs, a restaurant where guests have the chance to take part in a cooking demonstration to see how the local favourite dish is made. Cooked over a high flame, the dish is made in under 10 minutes. The end result, as everyone who sampled the dish can attest, is delicious. 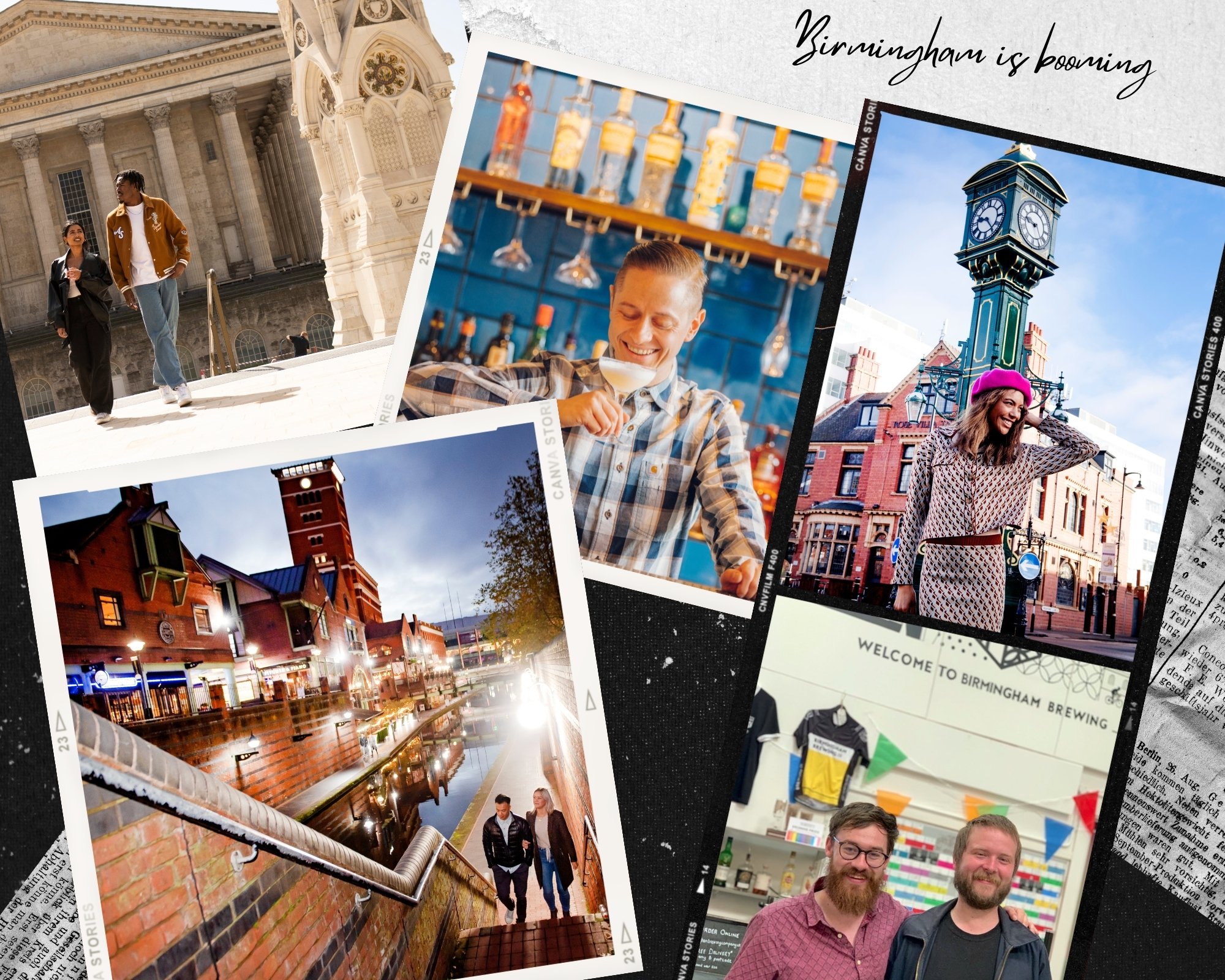 “It became a craze,” Munro shares. “In the ‘80s and ‘90s, I promise you, instead of talking about the weather, people would say ‘what’s your favourite Balti house?”

Beyond Balti, Birmingham was recently in the spotlight as the host of the Birmingham 2022 Commonwealth Games, which were the most attended edition of the games to take place in the UK and had six times the amount of BBC Sport streams compared to previous years.

Said to have more miles of canals than Venice, Birmingham is also a great destination to explore on the water. However, for those clients who prefer a local watering hole, The Canal House Bar & Restaurant overlooks the water and is frequented by athletes.

To get a taste of the independent beer scene, head to Birmingham Brewing Co., to sample a variety of brews made in house that are also vegan and gluten-free. 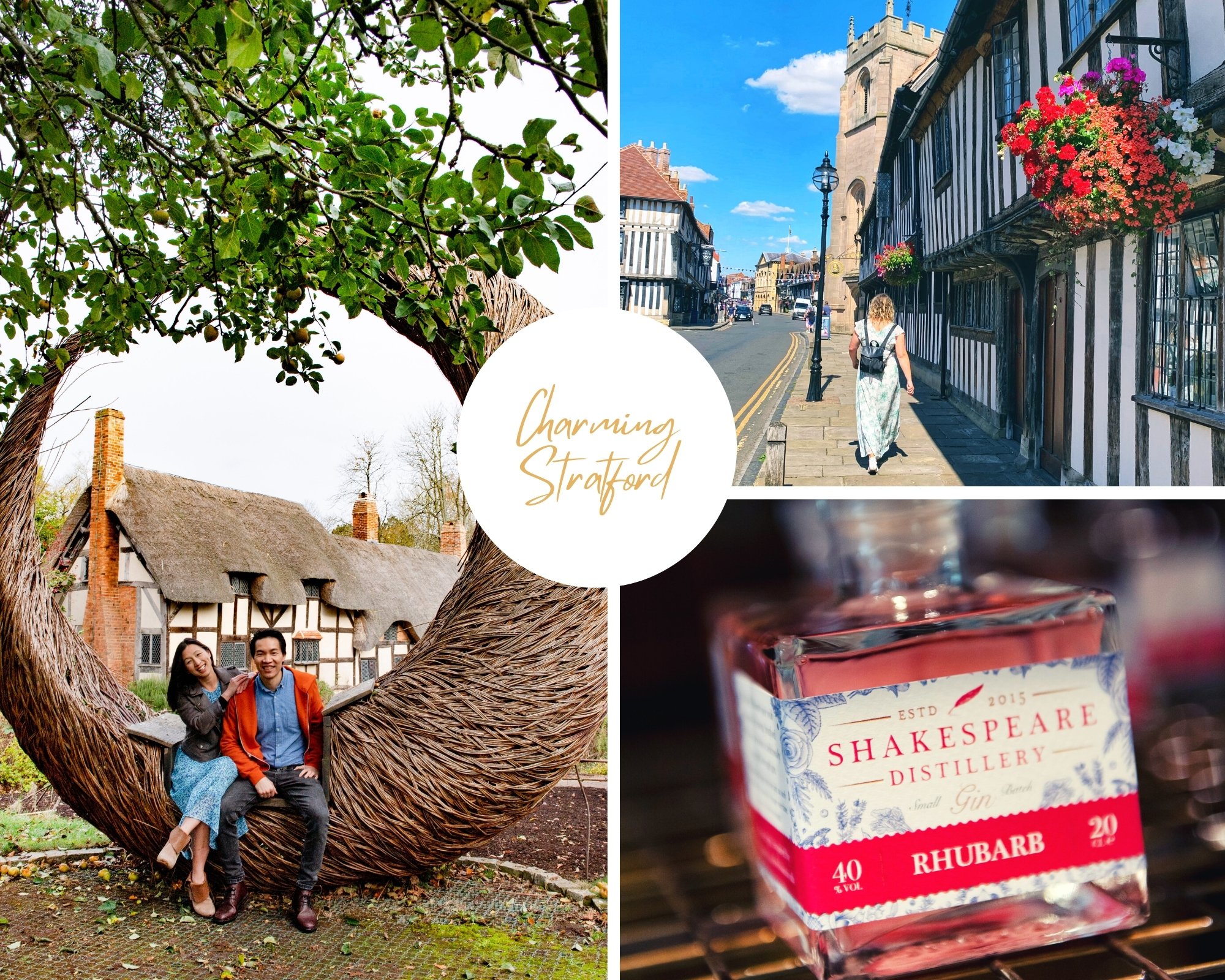 Although many travellers visit Stratford-upon-Avon to get a sense of where William Shakespeare grew up, the charming town offers so much for visitors to explore — including Shakespeare Distillery, an artisan spirit producer named after the town’s most famous inhabitant.

“This is a very old historic town with lots of history,” says tour guide Jan Boggis, while pointing out buildings of significance to the legendary playwright.

Theatre fans will want to experience shows put on by the Royal Shakespeare Company and visit Shakespeare’s Birthplace, Shakespeare’s childhood home, to hear tales of his upbringing and family life. During a visit, guests may hear the story of Sonny Venkatrathnam managed to smuggle a copy of Shakespeare’s complete works into Robben Island as a religious book, circulating it among the inmates, including Nelson Mandela, who signed his name next to this passage: “Cowards die many times before their deaths/The valiant never taste of death but once.”

Next year, to mark the 400th anniversary of the First Folio, a collection of 36 plays, Shakespeare’s Birthplace Trust will be bringing women characters into the forefront. There are also learning opportunities and special interest courses available.

The picturesque town is lined with shops, bar and restaurants. Another great vantage point is to soak up the scenery during a boat ride on the Avon. This is also a unique option for clients looking to spend the night on a barge.

Come sail away on Norwegian Prima