Nobu brings something of Japan to Los Cabos

Japanese influences are seen throughout hotel

A destination famed for its abundant sun is offering accommodations clearly influenced by the Land of the Rising Sun.

Nobu Hotel Los Cabos — part of the Nobu restaurants and upscale resort brand — is found a little outside of sun-soaked Los Cabos, and has Japanese traits throughout a property that’s part of a company that has a major Japanese stakeholder.

Nobu is also known in part for being partly owned by actor Robert de Niro.

The Nobu Hotel Los Cabos has 200 guest units, among them swim-up suites and suites with a private pool, while some types of guest units bear the names Sake Suite and Zen Suite, again reflecting Japanese influences in a hotel that’s design is described as “contemporary Japanese minimalism.”

Arriving guests will be greeted by staff saying “Welcome home” in Japanese, while guest units feature the likes of the wooden bathtubs that are popular in Japan. Found beside the bathtubs are wooden containers of water Japanese normally use to wash themselves before entering a bathtub, with resort sales manager Raquel Schulte saying her property’s guests don’t generally use those containers but the hotel keeps them for authenticity reasons. 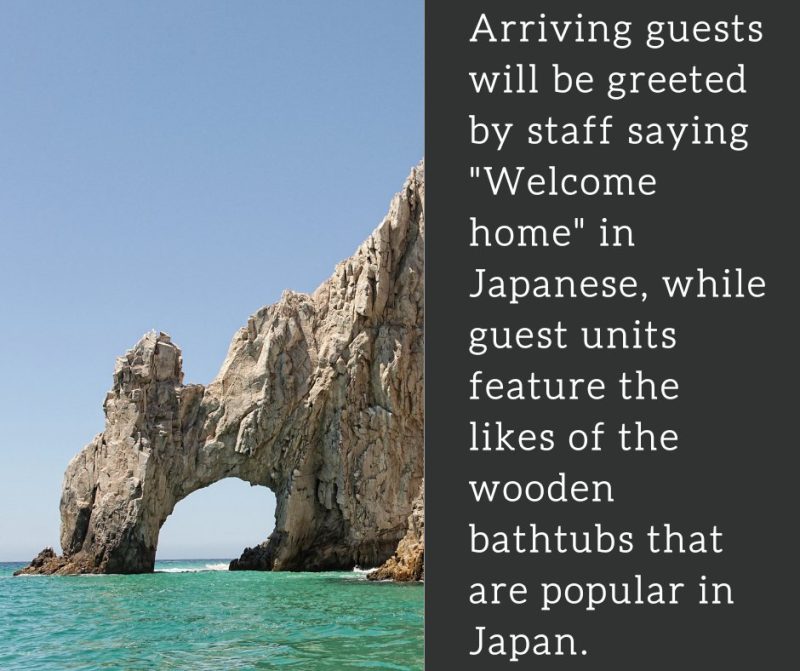 Guests can also find the likes of large-screen TVs and the smart toilets that are popular in Japan in their units.

Eating options include a Nobu restaurant and the property is adding a sushi bar slated to open in March.

The resort also has reminders that guests are in Mexico, with a Mexican restaurant on site and Mexican alcohol available in bars.

The Nobu Hotel Los Cabos — the only Nobu resort in Latin America — has its own sake and Schulte says the Nobu name resonates with visitors. “It’s a very well-known brand around the world.”

The Nobu and a nearby Hard Rock Hotel — which have the same owner — are found in a private area that has a security gate vehicles need to pass through before entering, prompting Schulte to say the Nobu offers both “inclusivity and privacy.”

Schulte says the Nobu “concept is more relaxed,” with guests not going to have to cope with “super loud” music during their stays.

The family friendly hotel has four swimming pools, a spa, a gym and other features include a culinary garden.

The hotel is an EP property, which Schulte views as “more classy” than all-inclusive properties and she also believes Los Cabos is “probably the most upscale destination in Mexico.”