When it comes to what travellers want on upcoming trips, price is no longer king. Results from Expedia Group’s Traveller Value Index research across 8,000 people in eight countries — including Canada — found that the ability to get a refund was the most important factor among respondents as they look to travel again.

Conducted by Wakefield, the goal of the research was to understand travellers’ values and expectations as the pandemic becomes more controlled in many parts of the world.

“One of the most promising things for me, and what energizes me the most, is when we asked the respondents, 75% of them are likely to travel in the next 12 months,” says Hari Nair, Senior Vice President and General Manager, Lodging and Activities Account Management, Expedia Group. “That number, back in December was only 50%. That’s a good step, change, in terms of people’s likelihood to travel, which is just great for the travel industry.”

The research showed that travel in the great outdoors is here to stay. 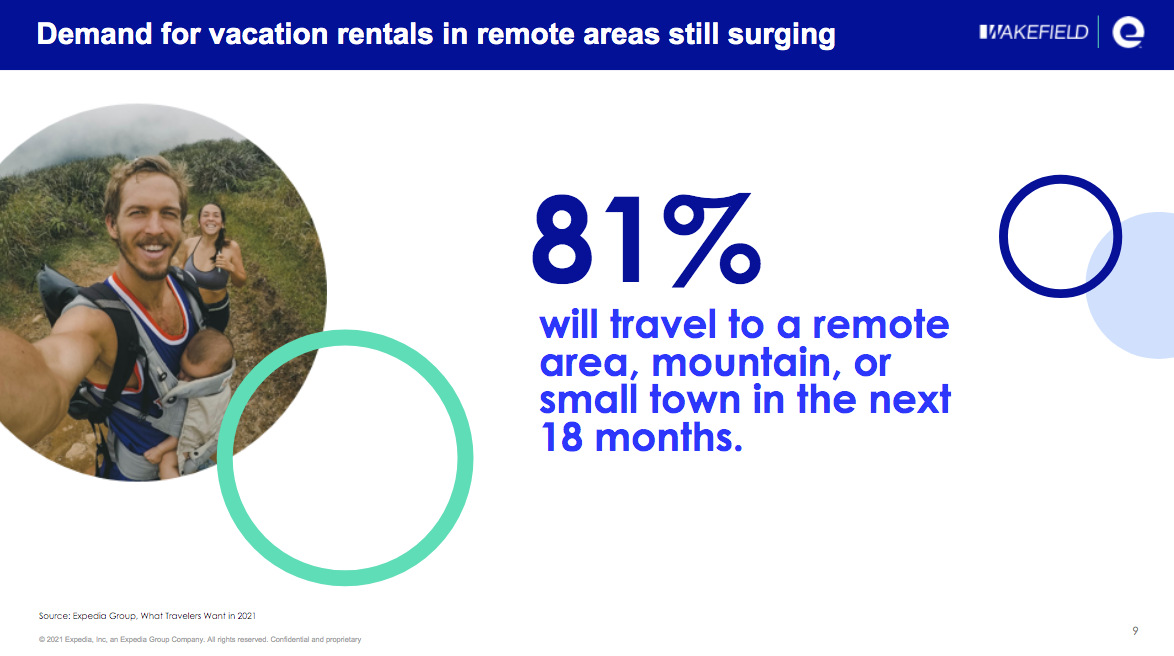 “This is not an aha for us — we’ve seen a rise for non urban areas, including beaches and mountain destination areas and small towns,” he says. “Non urban travel is here to stay — 81% of respondents mentioned they were likely to travel to one of these areas, which is just great to see.”

For anyone worried this may impact urban travel, fret not. Urban escapes are also making a comeback according to searches across Expedia’s platform. 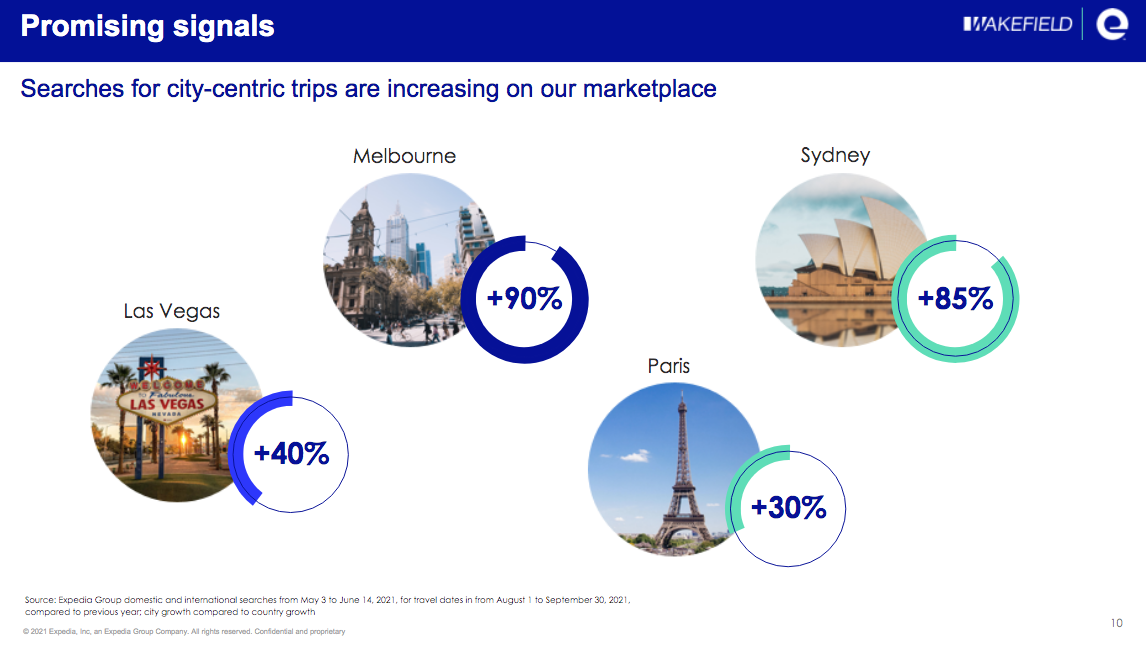 “It’s great to see that urban escapes are making a comeback,” he says. “This is the year-over-year search increases that you see on our platform for some of the destinations. As we see that more people are getting vaccinated, there’s going to be ease in travel restrictions.”

As for international and long haul travel, the survey found some interesting findings around vaccine passports. 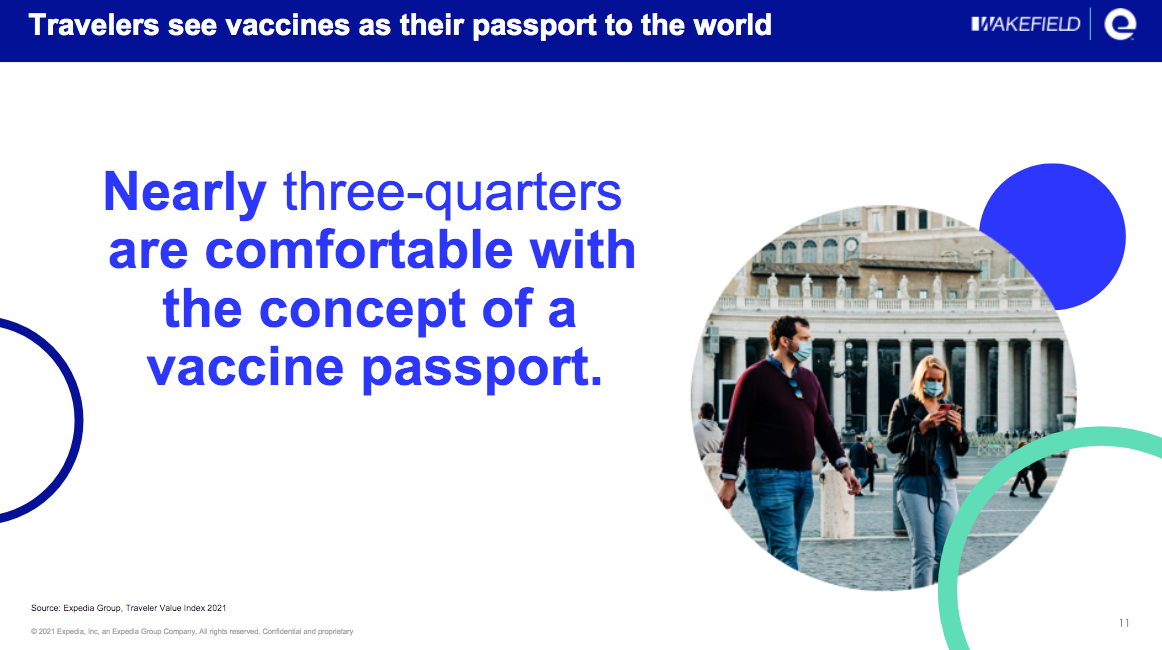 “What we learned is great and that is that nearly three-quarters of our travellers and our respondents are comfortable with the concept of a vaccination passport,” he says. “Just the fact that travellers are going to be comfortable showing proof of vaccination is just a great thing and it is really going to be important for us to open up our international corridors. It really opens up international travel. This is going to make our business not just survive, but thrive.”

Among the eight participating destinations, Mexico and the UK were the most pronounced in terms of their comfort levels around being issued a vaccination passport to travel freely. 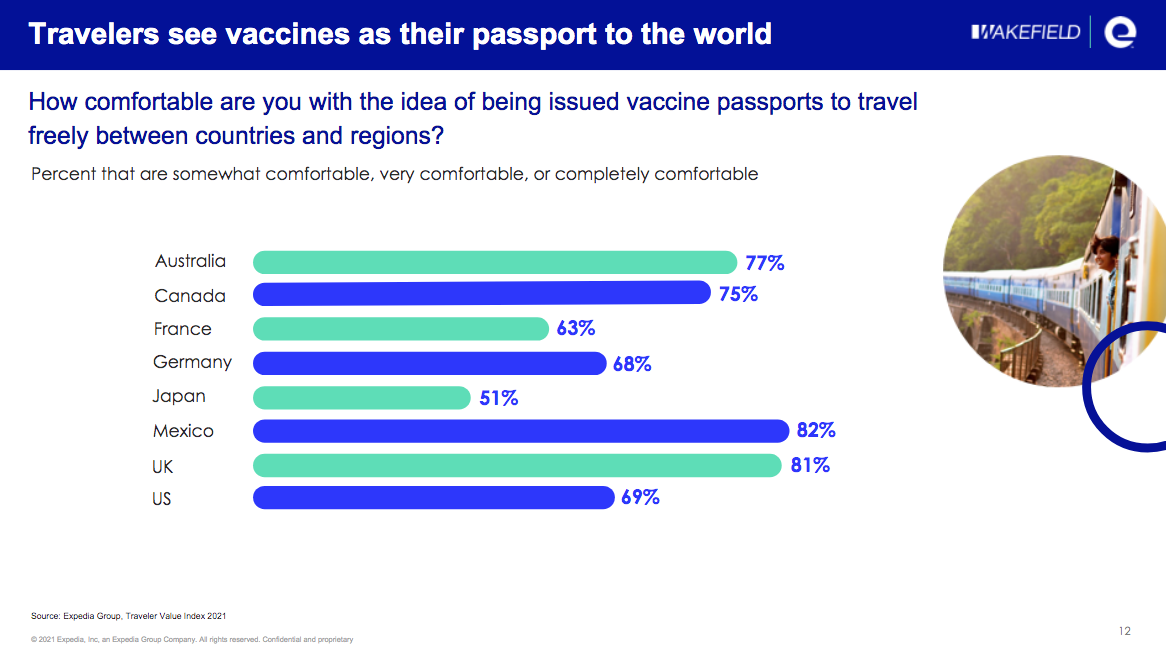 Two other factors that impacted travellers’ sentiments surrounding vaccine passports were A) people’s likelihood to travel to a new destinations and B) whether or not they have a larger travel budget.

“If you’re likely to travel to a new destination, 79% of people would be comfortable being issued a vaccine passport. That number drops to 64% if you are not going to travel to a new destination,” he explains. “If you have a larger travel budget, nearly 85% are going to be very comfortable whereas if you have a smaller travel budget that number drops to almost 70% – 69% to be exact.” 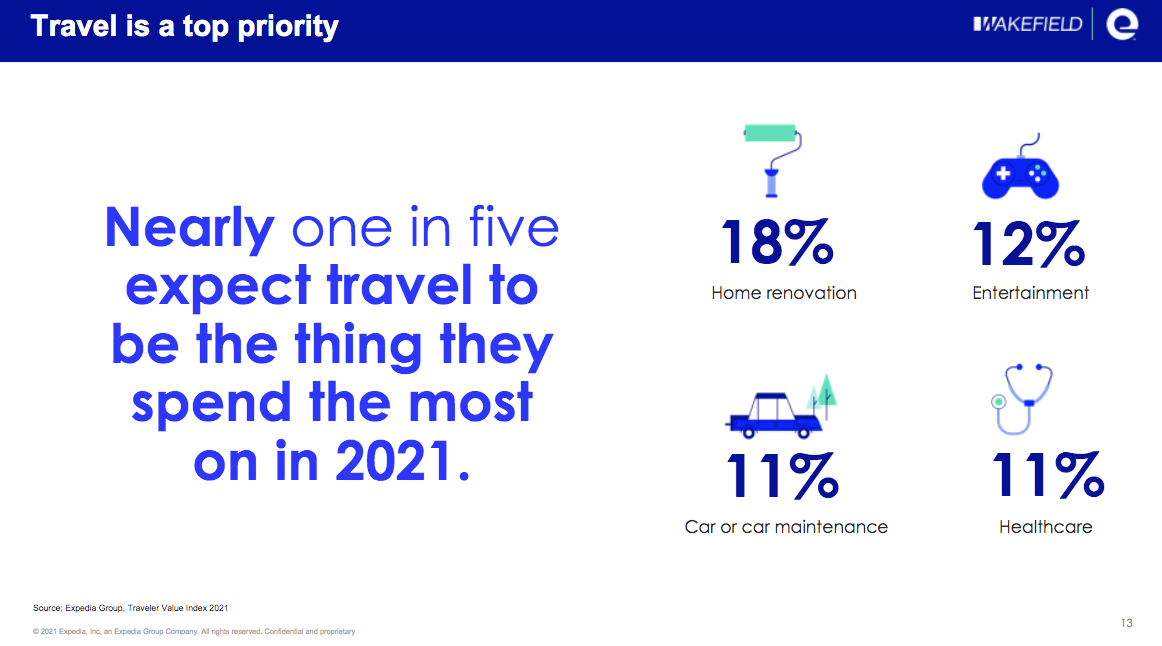 One of the key takeaways from the findings is that people are making travel a priority.

“This slide also makes me jump for joy. Travel is being looked upon as a top priority,” he says. “Nearly 20% of travellers expect travel to be the thing they spend most on in 2021. More than they would be spending on home renovation and entertainment.”

A significant amount of respondents said they would also have a bigger travel budget this year than they had last year.

“They’re likely to spend a lot more on seeing family and friends, which isn’t a surprise,” he says. “It’s great to see that travel is actually getting a giant share of people’s wallet.” 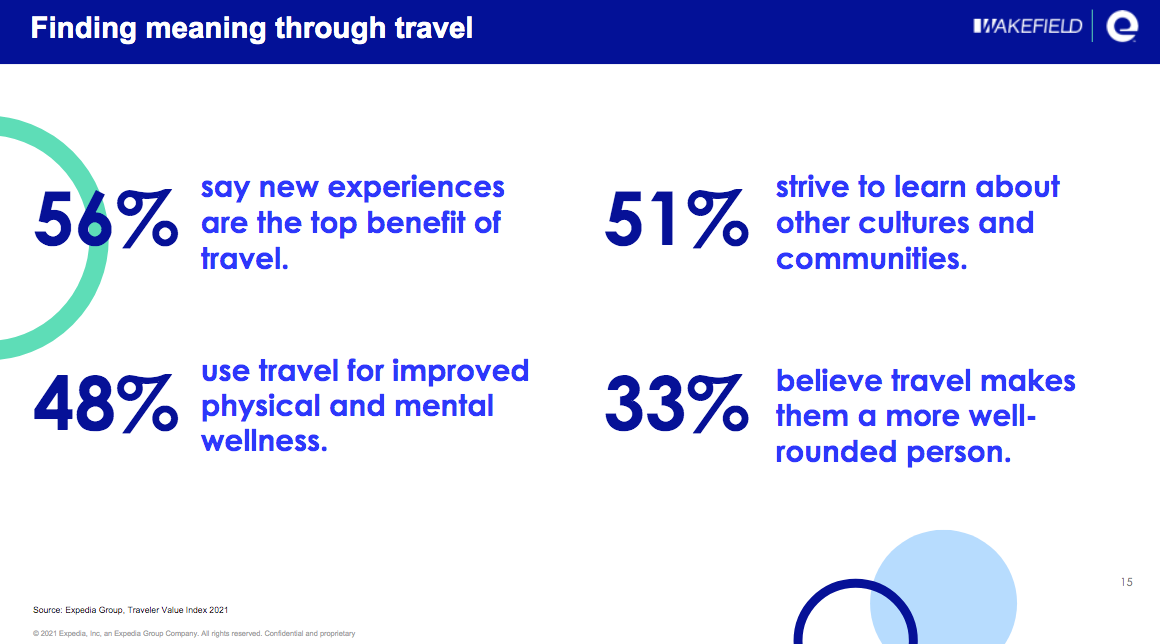 After a year where important topics on social injustices, equity and inclusion have been in the spotlight, travellers are also more conscious of who they are booking trips with.

“Now I think more than ever people are viewing travel and making choices based on their own values system and the data points towards that,” he says. “What we do know is that travel is a force for good. It teaches us a lot. It points us in directions and helps us deepen our understanding of people and places in ways we couldn’t before.” 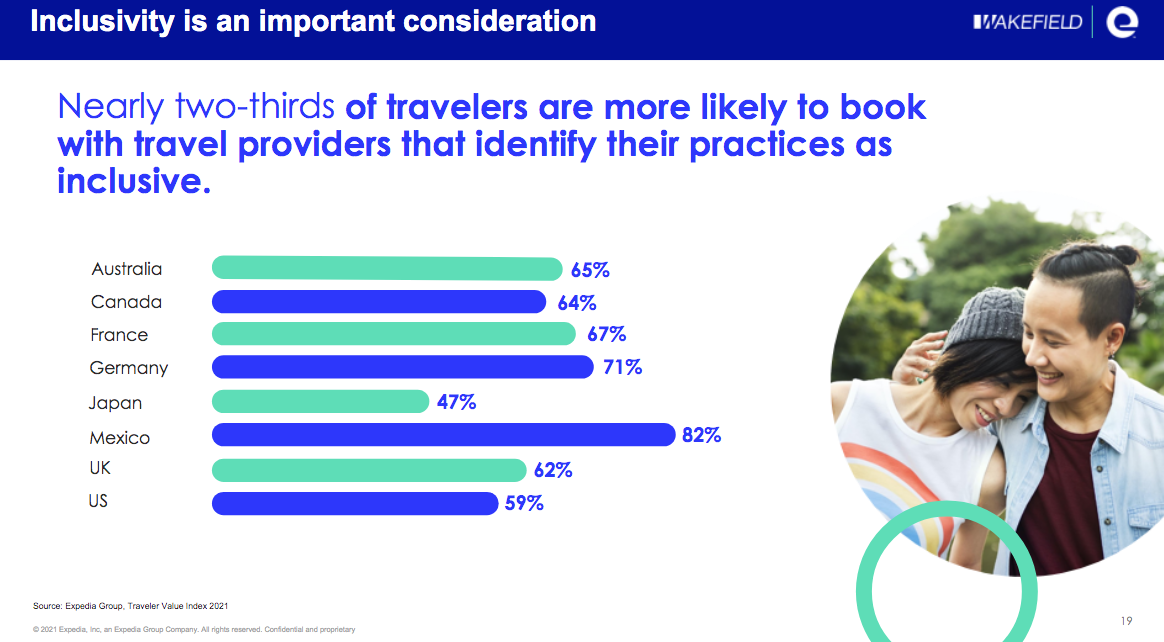 For an overview of the report, view this story. To view the full report, click here.

No Smooth Sailing For Mixed Doses?