Sandals Resorts International is ready to mark its 40th anniversary in November by ushering in a momentous growth strategy that will double the size of its existing portfolio.

“As one of the leaders in the all-inclusive market at the top end, we made a decision that we need to develop a growth strategy, we need to develop a pipeline and we need to really focus on value creation and value enhancement,” Gebhard Rainer, Chief Executive Officer of Sandals Resorts International, tells Travel Courier on location at Sandals Montego Bay in Jamaica. “Over the next seven to 10 years, we have laid out a plan that will more than double the size of the organization from where we are today.”

First up is the reopening of Sandals Royal Bahamian on January 27th.

“It’s going to be a fully renovated, very different resort than what it was before,” Rainer says. “We have some really exciting new features coming there. We are going to add on — not on the 27th of January but a little later — overwater villas there as well.” 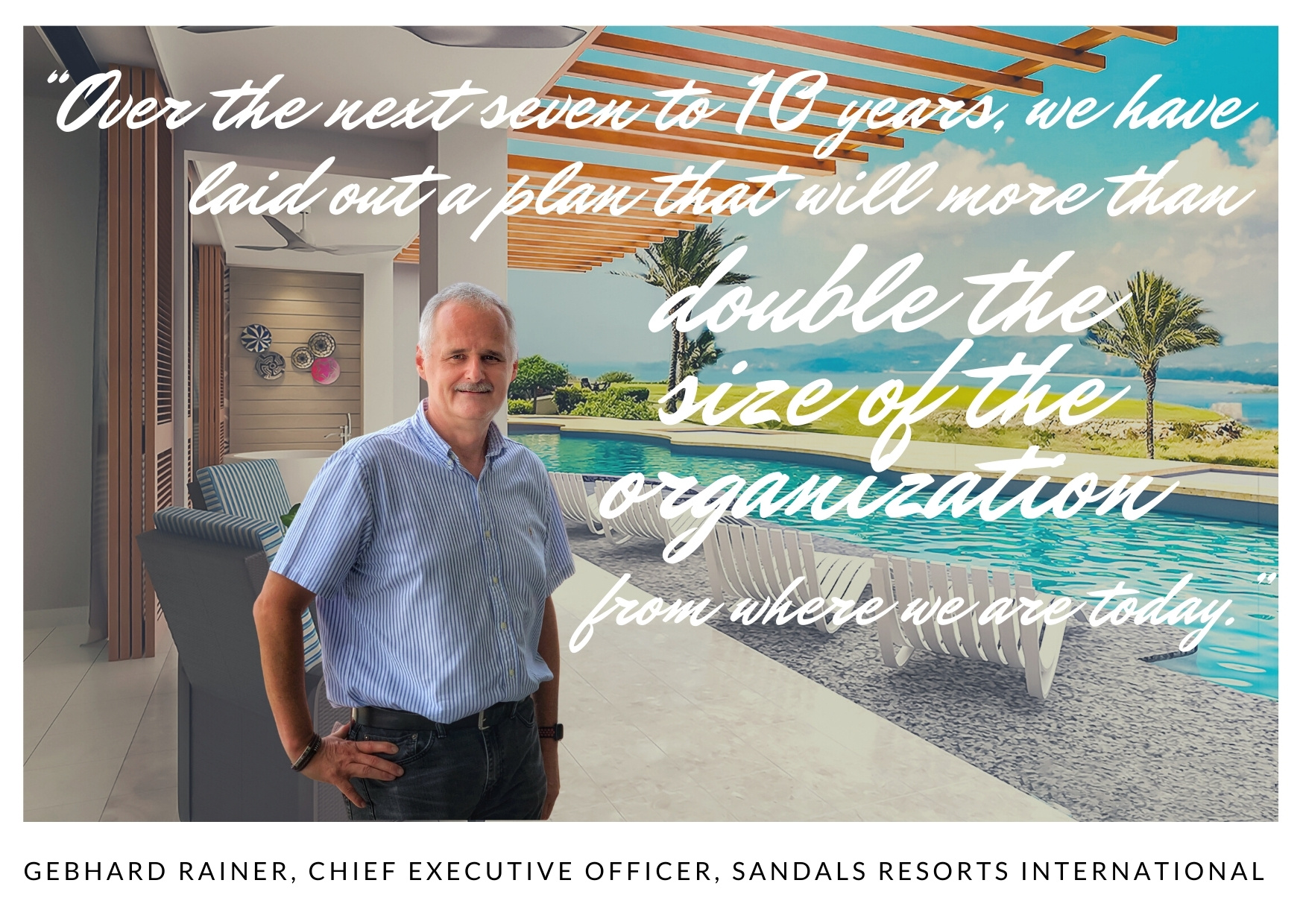 This will be followed by the opening of Sandals Royal Curaçao, set to open in April of 2022, marking the company’s first venture outside of the English-speaking Caribbean.

“It’s going to set the new standard of what Sandals is going to look like going forward,” he says. “We’ve got a number of new features: the heart-shaped pool, the villages over the pool, the ocean-front villas, it’s going to be some very exciting new stuff.”

Other notable features for the 351 room and suite resort include the first Dos Awa infinity pool and The Duchess, Sandals’ first floating restaurant and bar, which will be constructed from a 92-foot authentic Dutch ship.

“At the end of next year we’re opening Phase 1 of Dunn’s River in Ocho Rios,” he continues. “Phase 1 because we purchased land next to the existing Dunn’s River and we will develop a Phase 2, which will be a Royal Dunn’s River that will open in Dec. of ’23. Once Phase 2 is opened, we will have over 500 rooms there — similar to what we have at Barbados with Sandals and Sandals Royal.”

Moving over to Beaches, also on the docket for 2023 is the debut of a Beaches in St. Vincent and the Grenadines, marking the first Beaches in the Eastern Caribbean.

“St. Vincent is going to be truly the next generation of Beaches,” he says. “It’s going to be very family focused. It’s going to have some features that we’ve never had at Beaches. One of the most outstanding ones, one that people talk about, is we’re going to add glamping to our concept. Imagine a valley that goes down towards the beach surrounded by mountains with a river on one side coming down into the ocean. It’s lush greenery, rainforest greenery. We’re going to have a spa — we will build structures hanging over the water of the river for massage rooms with glass floors. We will build this glamping village into that rainforest part in the back of the property. Very high-end glamping with individual plunge pools.”

For butler category rooms, he says they are also looking to develop a catamaran boat transfer from the airport to the resort, which is the former Buccament Bay Spa and Resort.

Lastly, they are looking to expand the brand with Beaches Runaway Bay Resort as well as in Barbados.

“We’re opening a Beaches in Barbados where we have the land, where we’ve built out the beach already over the last couple of years. We have the plans ready for developing Beaches Barbados, we just don’t have a date yet,” he says. “Beaches is the brand that we believe has the biggest and the fastest capability for us. The highest demand is on the Beaches properties. We’re very focused on developing the Beaches part of the brand. We have a number of other Beaches projects in the Eastern Caribbean.”

Get up close and personal with sharks in Grand Bahama