Holland America Line’s newest flagship Rotterdam arrived in New York City on Oct. 26 after retracing the route of the maiden voyage of its first ship — Rotterdam I — which departed from the Netherlands 150 years ago on Oct. 15, 1872.

“It’s an honour and a privilege to represent the more than 15,000 employees of Holland America Line as we complete this journey that recreated the first Rotterdam voyage in 1872. On that crossing 150 years ago, Rotterdam 1 carried 70 passengers,” said Gus Antorcha, president, Holland America Line, taking the stage during a special event to officially kick off the cruise line’s 150 anniversary. “We arrived with many times that number today, on a ship that is the seventh to proudly display the name Rotterdam. The ship is the newest in the Holland America Line fleet. It is our flagship.” 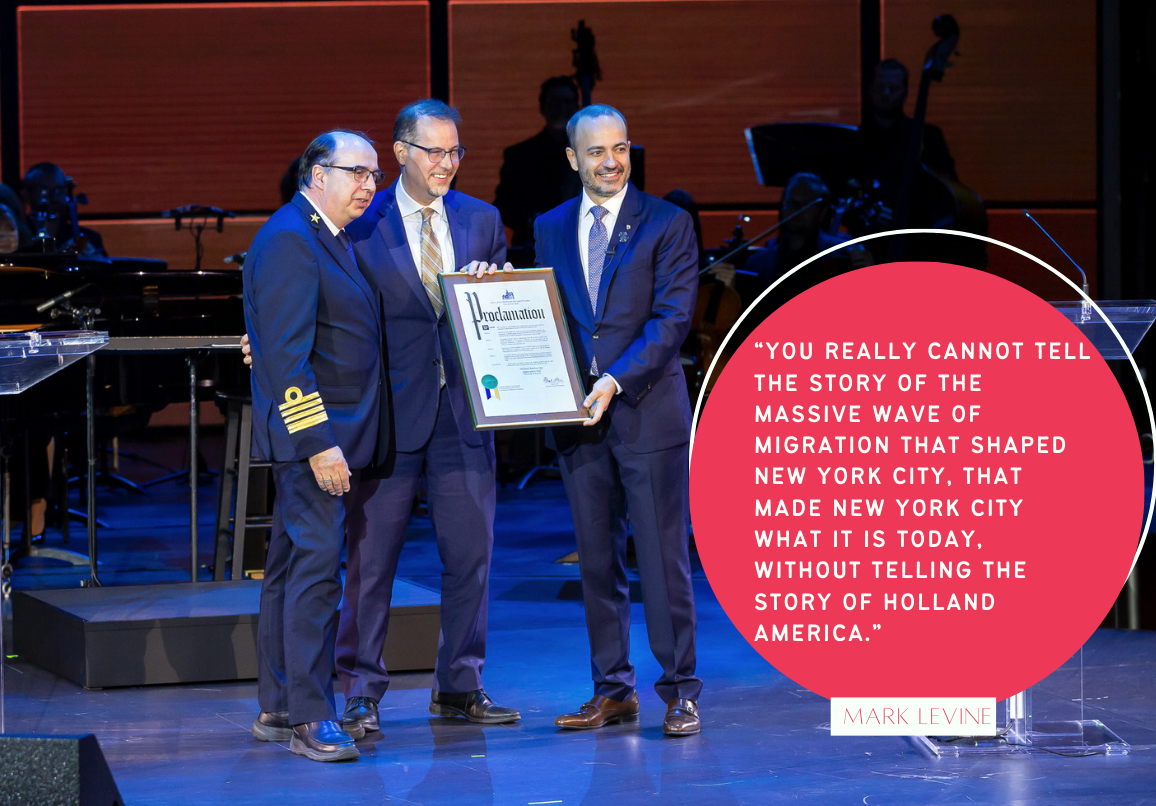 Commemorating the cruise industry’s impact — and particularly HAL’s importance in the immigrant journey from Europe to the US — a new partnership was announced with The Statue of Liberty-Ellis Island Foundation, which is curating an exhibit for visitors in its History Centre from Feb. to April 2023.

“Our history is deeply woven within the fabric of America’s story,” said Gus Antorcha. “It’s only fitting that as we celebrate this milestone anniversary, we partner with the entity responsible for restoring and preserving Ellis Island, the entrance to America that so many of our passengers experienced on their journey to a new start.”

Stephen Lean, director of The American Family Immigration History Center at Ellis Island, took to the stage to share that the foundation’s mission goes beyond preserving and protecting the two national landmarks of Ellis Island and the Statue of Liberty

“It’s about protecting and preserving and remembering and celebrating the stories of the people who were present on Ellis Island,” he said. “People brought over by shipping lines like Holland America Line.” 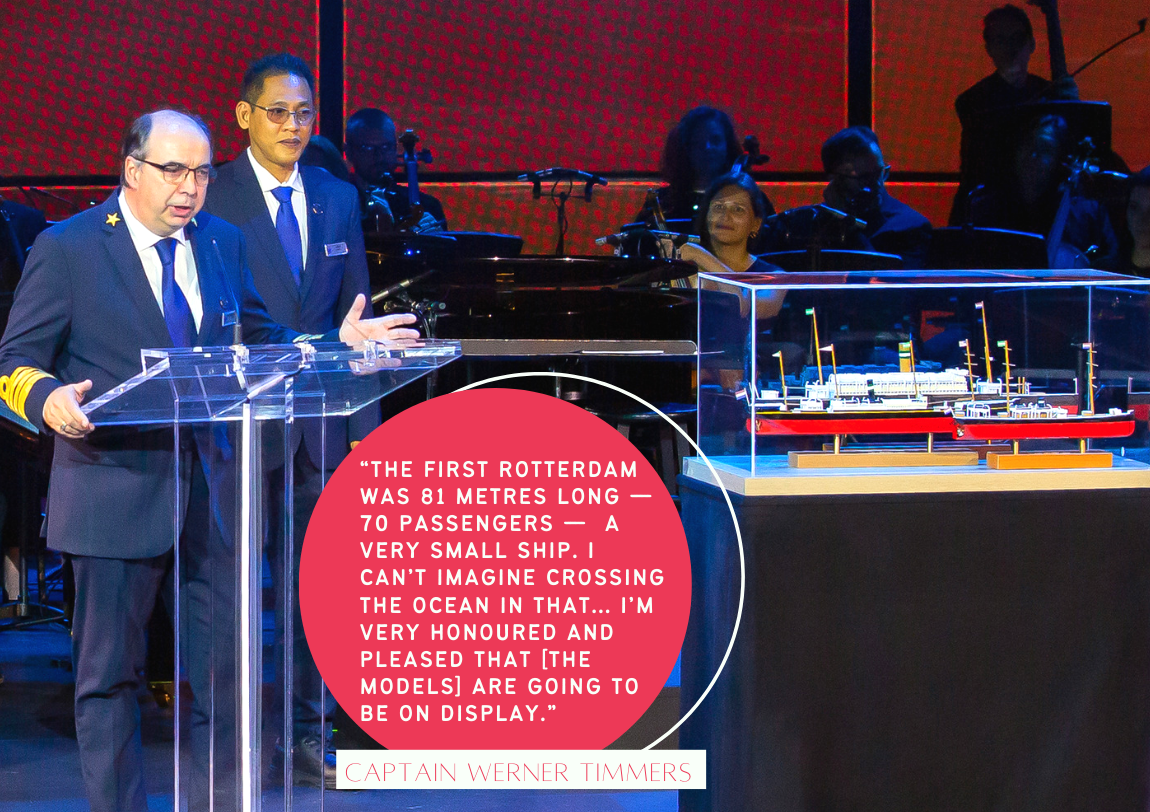 To drive home the legacy and impact Holland America had, Lean outlined some of the significant figures who made the journey to the US on a HAL ship. For example, Albert Einstein’s first trip to the US was in 1921 and Rudolf Heinrich Baer, who went on to design the first blueprint of the first home video game console — “so he’s known as the father of video” — made the trip in 1938.

“If you are a fan of the Muppets or Sesame Street, you’ll know that Frank Oz, born Frank Oznowicz, is the voice of a lot of characters like Miss Piggy, Fozzie Bear, and Grover,” he said, noting that his family immigrated in 1950. “All of our lives are made better by stories such as these, whether it’s music that helped define a generation, or a better understanding of how the physical world works. From video games to the voices of some of the most beloved characters to tens of millions of children around the world, these stories are worth celebrating. There’s an immigrant story behind all of these facets of everyday life that we sometimes take for granted. And written in that immigrant story for these and millions of others is a chapter that took place on a Holland America Line vessel.” 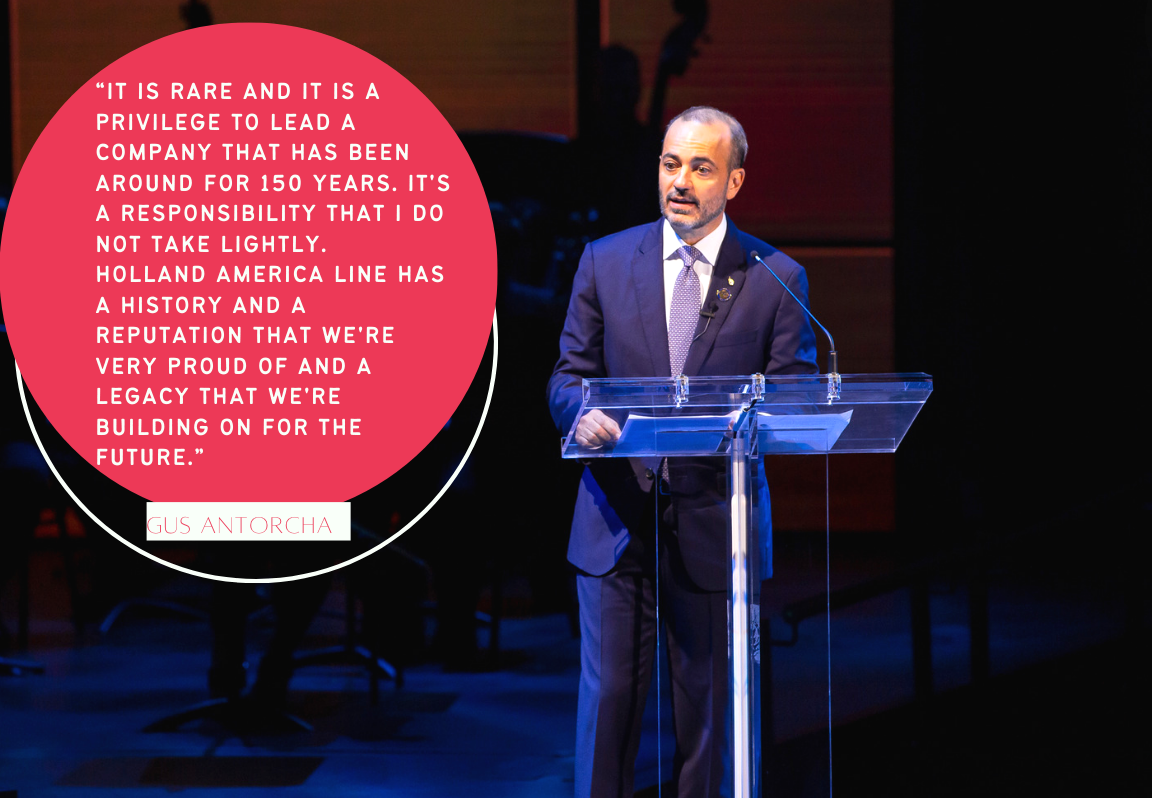 While the most represented ethnic group on its ships were Italians, he noted, “look underneath and that’s when you start to get into the Holland America Line story. People from Jewish backgrounds who were listed as Hebrew ethnically, Germans, Poles, Russians, people from Eastern Europe. This is when you find the stories of those communities so diverse, religiously, ethnically, linguistically — these communities for whom Ellis Island and the Holland America Line, were not just shipping lines, it was a lifeline.”

Rotterdam’s Captain Werner Timmers shared that he’s been spending his spare time helping to build some models of Holland America Line’s early ships, which will be on display as part of the exhibit.

“The first Rotterdam was 81 metres long — 70 passengers — a very small ship. I can’t imagine crossing the ocean in that — jumping up and down and back and forth,” he said. “I’m very honoured and pleased that they’re going to be on display.” 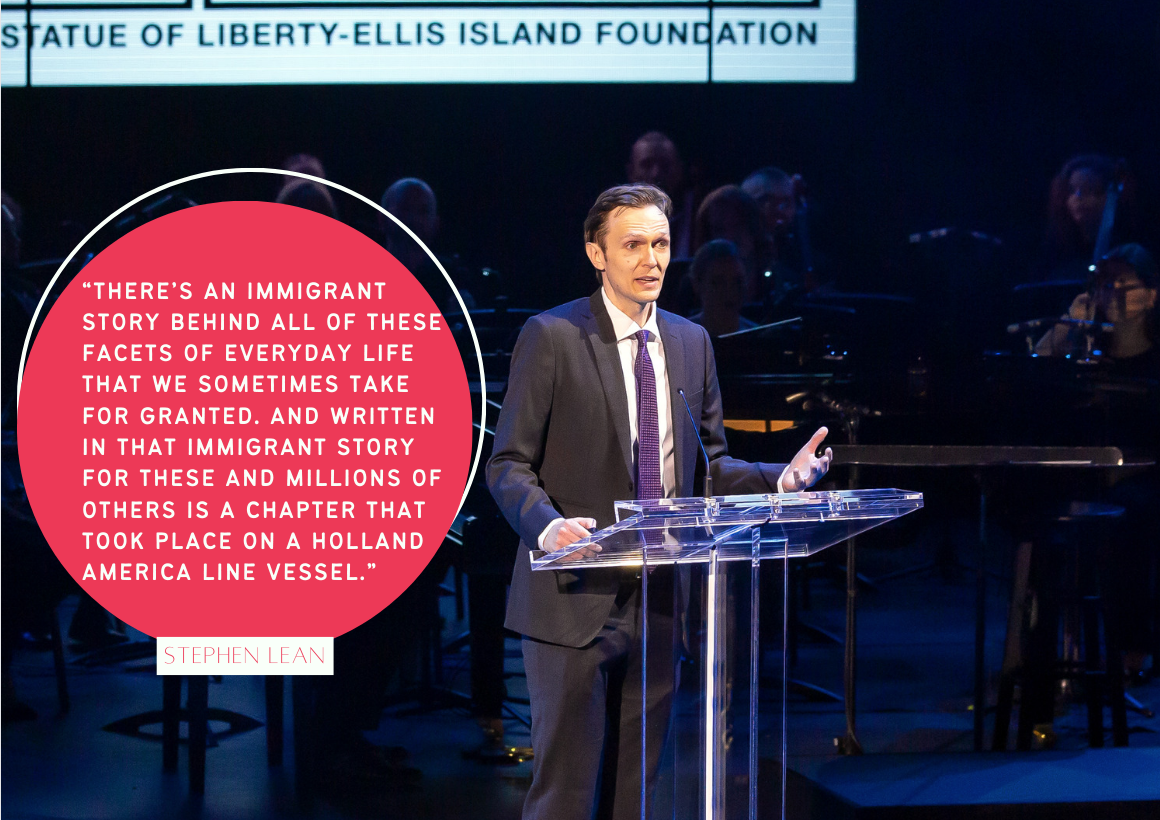 During the event, Mark Levine, the president of the borough of Manhattan, also designated Oct. 26 as Holland America Line Appreciation Day.

Notably, 1 in 10 immigrants from Europe to the United States made the voyage on a Holland America ship during the late 19th or early 20th century. The cruise line, which was founded in the Netherlands in 1873 as the Netherlands-American Steamship Company, carried nearly 2 million passengers to new lives in the New World. 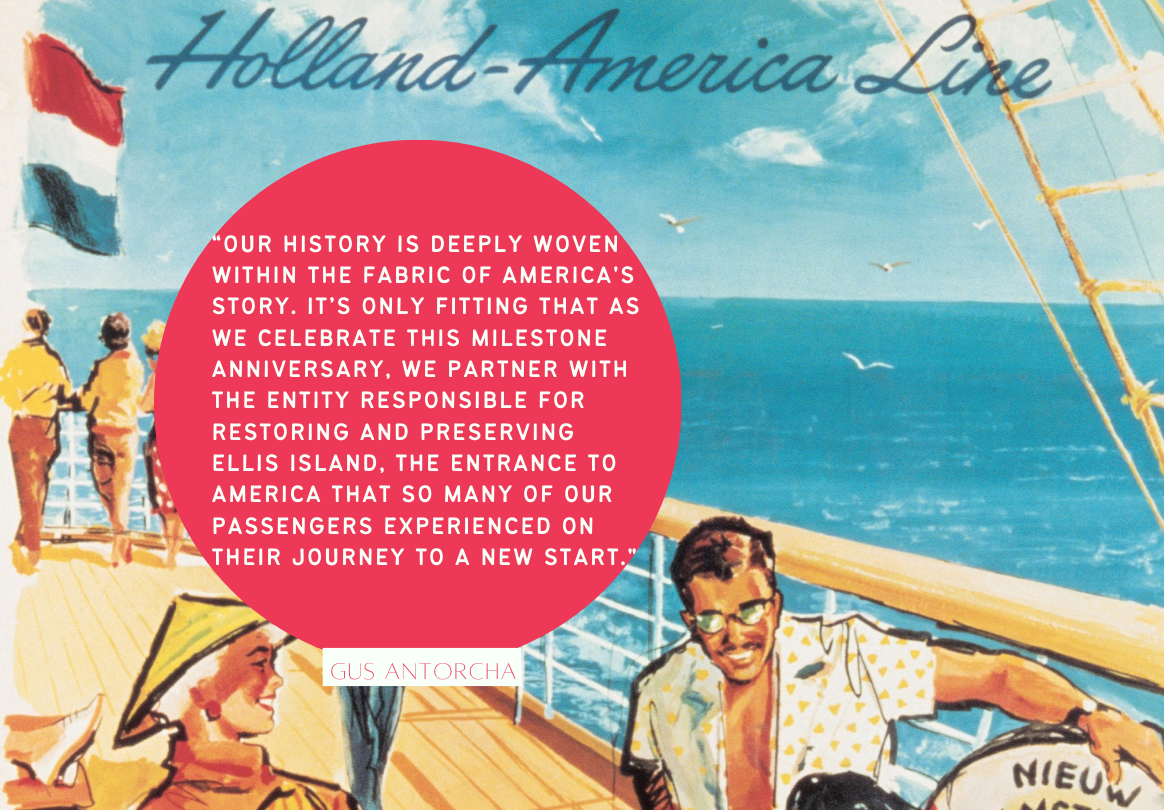 Meanwhile, cruise historian Bill Miller said, “150 years ago, this company started to carry people from the old world to the new. They carried first class passengers, but they realized that the biggest business was carrying immigrants in third class or steerage, and Holland America always a clever, insightful company, developed a plan that would make it the best immigrant passage on all the Atlantic Ocean.”

Holland America Line was the first to do away with “Steerage class” altogether, renaming it “Emigrants Class” where unlike the competition, guests were served three square meals. 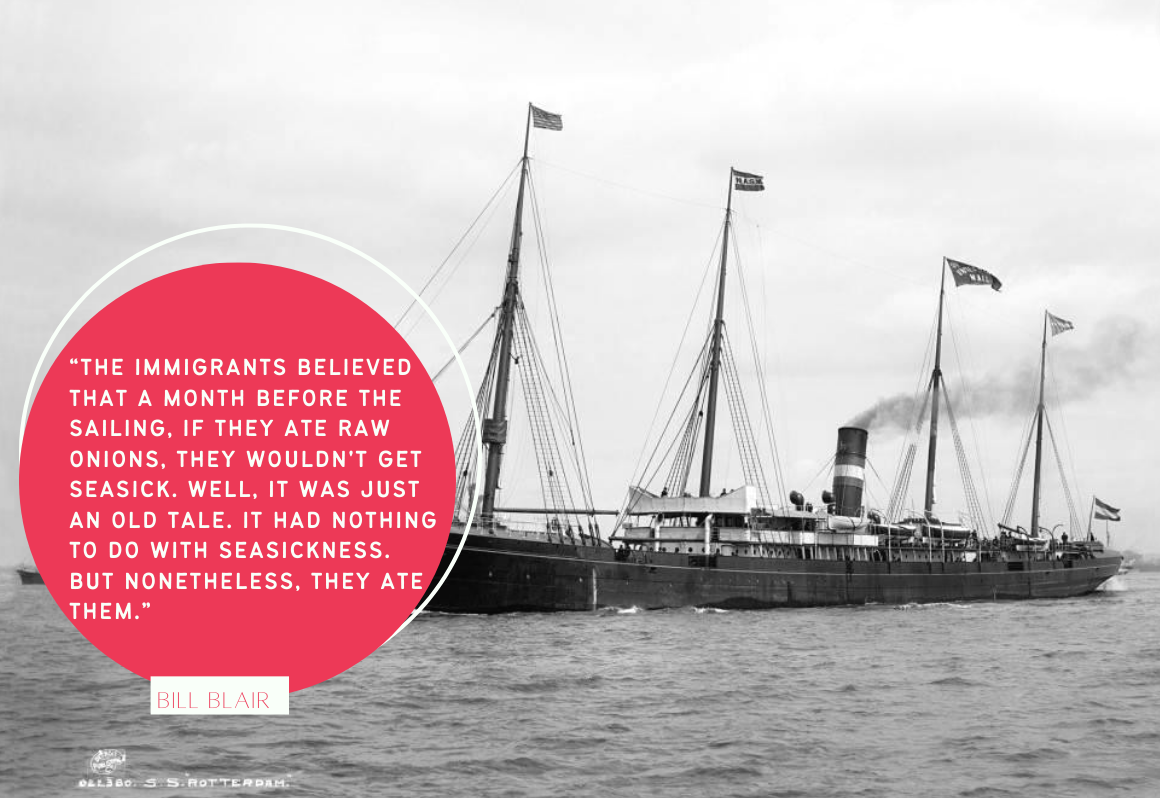 Fun fact, he added that, “by the way, the immigrants believed that a month before the sailing, if they ate raw onions, they wouldn’t get seasick. Well, it was just an old tale. It had nothing to do with seasickness. But nonetheless, they ate them.”

To cap off the presentation ahead of an evening of entertainment on the ship, Antorcha returned to the stage to highlight the company’s resiliency, overcoming wars, a depression, the development of transatlantic flight and the recent pandemic.

“It is rare and it is a privilege to lead a company that has been around for 150 years. It’s a responsibility that I do not take lightly. Holland America Line has a history and a reputation that we’re very proud of and a legacy that we’re building on for the future. Anniversaries are a great time to reminisce, but it’s even more important for us to think about the next 150 years and how we intend to stay relevant to generations to come,” he said. “I proudly proclaim the beginning of Holland America Line’s 150 anniversary!”

Cuba is fully open for tourists