Fun for the whole family at this children’s animal farm

Jeanne Selander has something of a captive audience willing to lend a helping hand to her feathered friends.

As well as assisting Cricket the armadillo, a 70-year-old African spurred tortoise dubbed Albert and a host of other creatures, Selander is the supervisor of Monroe County Sheriff’s Office Animal Farm, which is located on the grounds of the Monroe County Sheriff’s Office detention centre near Key West, Florida, and houses about 150 domestic and exotic animals from 45 species.

Selander — nicknamed Farmer Jeanne — oversees a crew of inmates who help care for the animals. Those inmates are screened and classified as being safe to work outside the detention centre and interact with the public, who are welcome to visit the facility. 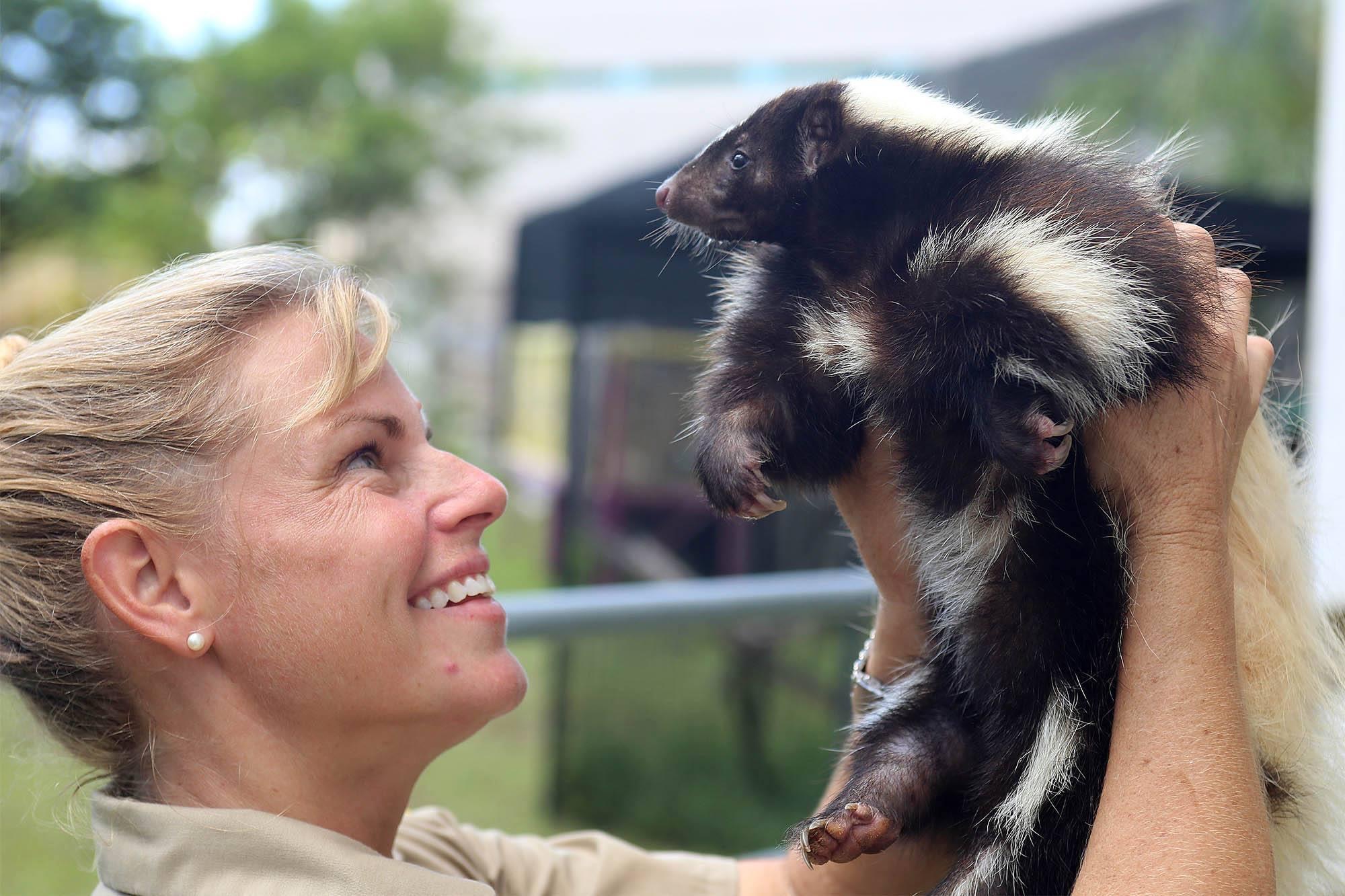 “The inmates working on the farm benefits the farm, because we have a workforce that can actually help care for the animals,” said Selandar. “And it’s beneficial to the inmates because they get to be outside, they get to work with the animals, they get to feel like they’re making a difference.”

The “Trusties” feed, water and care for animals that range from pigs and miniature horses to Kramer the emu (“Kramer came from a facility in Central Florida that raises emus only for petting zoos. They contacted me and asked if they could put our name on an egg. When the egg hatched, we received Kramer four days later,” Selander reports), Cricket, an alligator, kinkajous, a pair of lemurs and tortoise Albert. They also build habitats, paint and repair fences, along with introducing visiting families to resident animals.

“This is an animal sanctuary, and we take in animals that have been abandoned, abused, confiscated or donated,” said Selander. “They come to us because they need a home, and we give them a forever home.”

Selander speculates the facility — usually open to the public on the second and fourth Sunday of each month — may be one of a kind.

On Easter Sunday, the farm was open to the public for their annual Easter party complete with the “Easter Bunny,” as well as inmate trusties who introduced visiting families to resident animals.

“It started completely by accident,” Selander said of the unusual program. “The jail was constructed in 1994 and ducks were crossing the road between the golf course and the jail. They were getting hit by cars, and one of the deputies suggested having the inmates round up the ducks and put them on the unused property beneath the jail. They would create a break area with a pond and picnic tables for the deputies. The rumour started that we were taking in animals, and people started dropping them off. Inmates volunteer to work on the farm, with their valued work including assisting with cleaning, watering, feeding, maintenance and repairs, plumbing, habitat construction, and anything else that is needed. They are also able to interact with the public on open house days and when groups visit the farm.”

“It’s calming, very calming,” said trusty Michael Hernandez. “Keeps you out of trouble, keeps your mind focused. You know you’re in the outside world.”

Hernandez describes himself as an “animal person, as a matter of fact, when I get out, I’m hoping to visit the farm to do some more work on the farm, paint some more, play with the animals some more — you know, so they won’t forget me.” 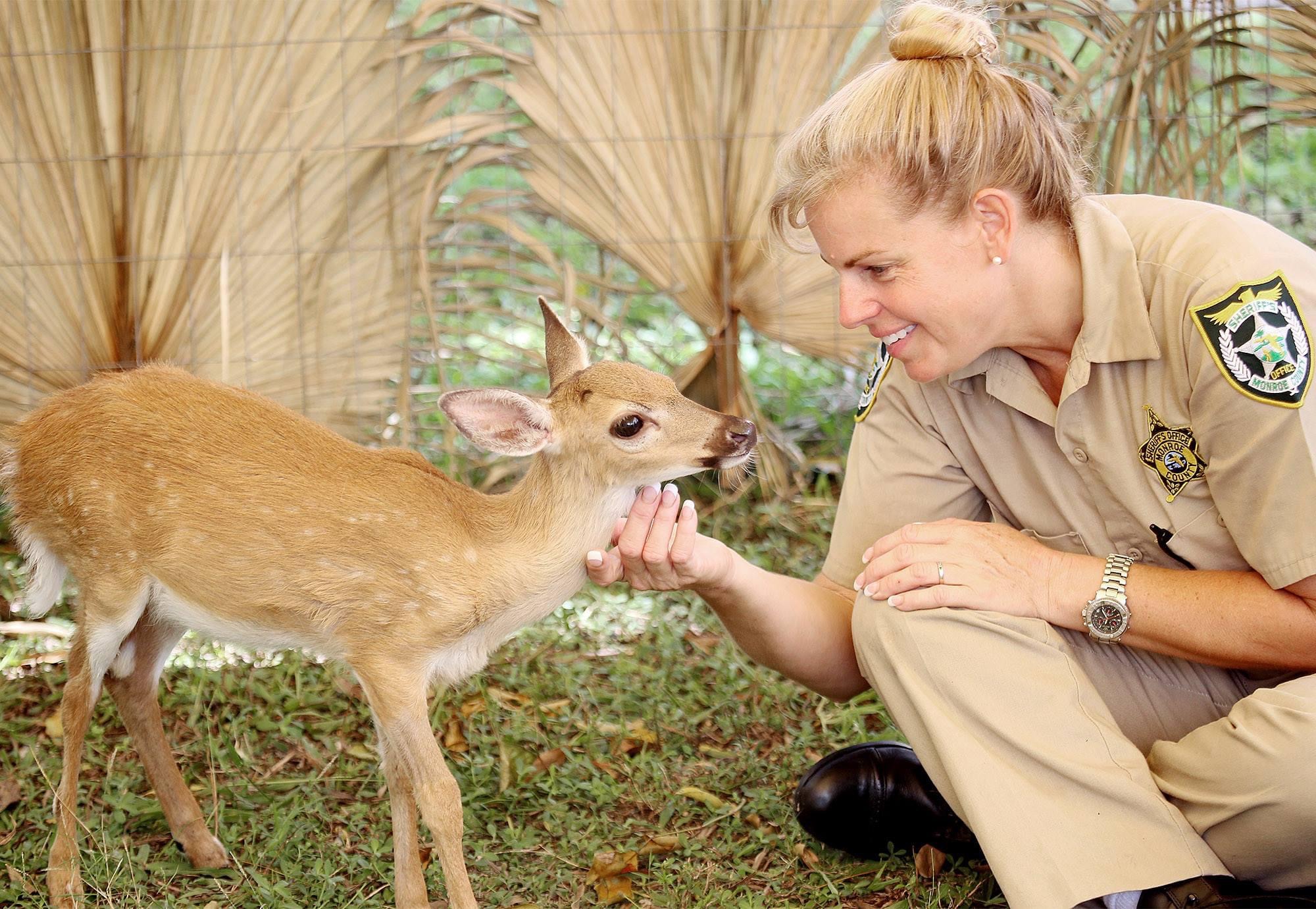 Selander said both the inmates and the animals benefit from the program, with inmates getting to care for “something that loves them unconditionally, and the animals receive the same caring and love in return.”

She conceded some visitors are apprehensive about the petting farm’s location.

“When I first took over the program 16 years ago, I made it my mission to get the animals out into the community and let people know that this program existed,” she said. “I would take animals to community events all over the county, which in turn brought people to visit the farm. Once they arrived at the farm, they realized that it did not even look like a jail, with the exception of the razor wire, security fences, and inmates in orange (jumpsuits). The farm is very beautiful and inviting. Visitors do not have to go through security checks.”

Typical inmates at the jail are low-level offenders, although there are occasionally high-profile felony cases awaiting trial or sentencing. Those inmates wouldn’t be allowed to work on the farm.

Selander reported that it’s common for animals and inmates to bond.

“When the inmates are released they often return on open house day to bring their families and to visit the animals they love,” she added. “This is a unique program which I am proud to oversee. It not only benefits animals, but also the inmates, and it receives amazing support from our community. It has gone from being an oddity at the jail, to being an internationally recognized facility.”

SAS launching direct routes from Toronto to Copenhagen and Stockholm