Discover another side of Yucatan

This isn’t the sort of cave that comes to mind when people think about Bruce Wayne and Dick Grayson.

In fact, the subterranean retreat dubbed the Bat Cave and used by Wayne – whose alter ego was Batman on the popular 1960s TV show of the same name, a show he appeared on with sidekick Grayson, also known as Robin – didn’t seem to have any airborne mammals or slithering predators, unlike the Yucatan cave Cancun-based Eco Colors takes people to.

Eco Colors – run by biologist Kenneth Johnson – has people visit a cave near the town of Kantemoh, about two hours south of the popular seaside community of Tulum.

But it does serve as a home for different creatures, adds Johnson, a participant in the recent Mundo Maya virtual show.

“The cave has mainly boas, and some other snakes like coralillos, rat snakes, etc and many bats, and also inside the cave there is a cenote (underground water body) that has blind fish,” he reports.

The boas frequently hang from the cave ceiling, trying to snatch bats as they fly out of the cave at dusk.

Johnson concedes that bats and boas aren’t everyone’s cup of tea. “People that like this type of wildlife love the experience. People that do not like snakes or bats obviously do not even enter the cave or take the tour,” he says of a day trip billed as great for those who like reptiles.

Eco Colors clients are given flashlights to enable them to see in the darkness.

They’re usually in the cave for 1 to 2 hours and the tour company states participants will “feel like you’re in a National Geographic documentary.”

After the cave visit, the group cycles at night along a jungle trail to a lake, where they canoe in search of crocodiles. 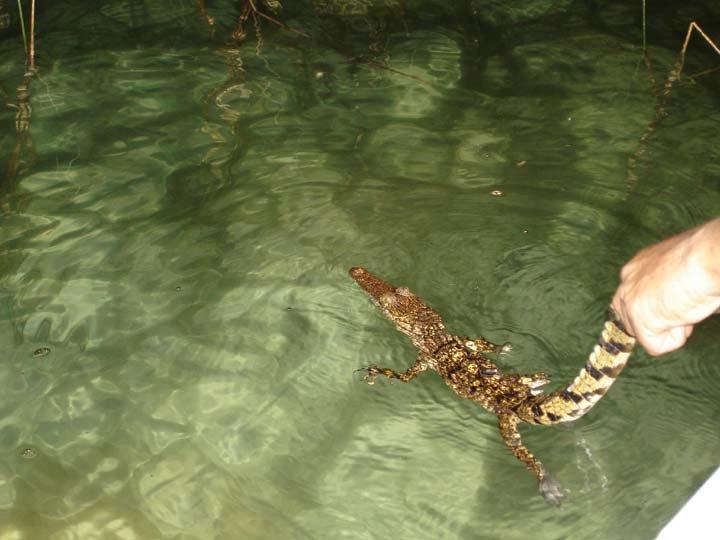 Crocodiles also  may make some feel uneasy. Eco Colors has a large number of tours, some of which feature sightings of such seemingly benign creatures as monarch butterflies, monkeys and turtles.

But biologist Johnson notes that just because the likes of bats and boas don’t seem cute and cuddly doesn’t mean that they’re not important players in Yucatan eco-systems.

“For nature lovers it is for sure a fantastic trip,” he says of the cave visit.

The tour is available year-round and Eco Colors will pick clients up and return them to their Cancun hotels.

More information can be found at ecotravelmexico.com.