Take a dip in the Arctic

Count John Houston among those who think it’s cool to be cold.

Houston’s busy plate includes working as a guide on Adventure Canada Arctic sailings and he is among those who have welcomed the opportunity to leap into frigid Arctic Ocean water while in that part of the world.

And at times hasn’t been in any hurry to scramble out of bone-chilling water either.

Adventure Canada invites passengers sailing with it in the Arctic to at one point jump off a then- stationary ship into the ocean, with crew members on hand to ensure the jumpers safely re-emerge from the water, something most jumpers decide to do quickly, eager to leave water that’s barely above freezing temperature behind and reboard a warm ship.

But that isn’t always the case with the hardy Houston, who at one point stayed in the ocean for a startling length of time.

“It was clocked at 33 minutes by gangway staff,” Houston recalls of water that can cause many to quickly go numb. “I have often done 11-15 minutes, and 22 on another occasion. It all depends on how I am feeling… or if I am feeling anything. 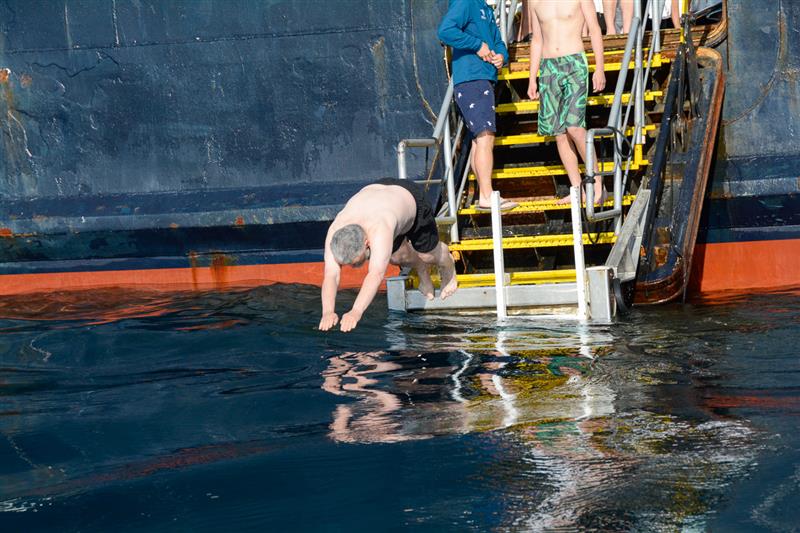 “A few adventurous souls swam out and high-fived me before exiting the water,” Houston says of the 33-minute immersion. “And then there have been those intrepid types, part polar bear, I suspect, who hung out with me for up to 5 minutes. My son, Dorset, was among these at the age of 11.”

(Not all are enamored with the thought of jumping into Arctic water, with one 2019 Adventure Canada client suggesting she was on a “ship of fools” when she realized that most of her fellow passengers were signing up for the experience.)

The Houston name is a familiar one in the North, with John actually having spent his earliest years in what is now Nunavut, where his father James Houston was among other things an artist and with his wife Alma helped develop a southern market for Inuit art. 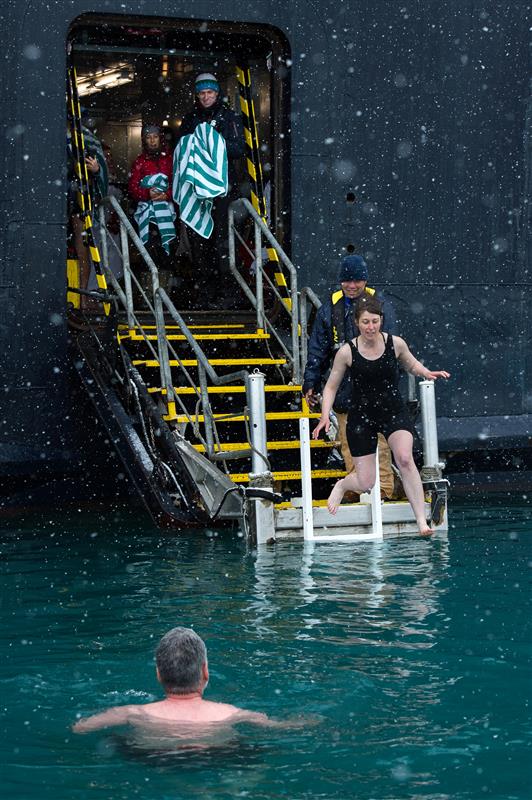 John Houston – who now has an art gallery in Lunenburg, N.S. – returned to Baffin Island as an adult, and relearned Inuktituk and has also become a film-maker, frequently telling Northern stories.

So how does someone steel himself or herself to spend over half an hour in water that should seemingly induce hypothermia in a much shorter period of time?

Well Houston – well aware of accounts of men who ended up in the North Atlantic after their ships were torpedoed in World War II and quickly died from hypothermia – says it’s important not to leap in without any forethought.

“I believe it has to do with mental preparation, understanding the phases and living through them,” he states, adding he believes it would be “quite risky” to jump in without a set immersion time in mind. “Know when to get out of the water, though that was impossible for the WWII crewmen, many of whom I suspect drowned from shock and breathing in sea water. 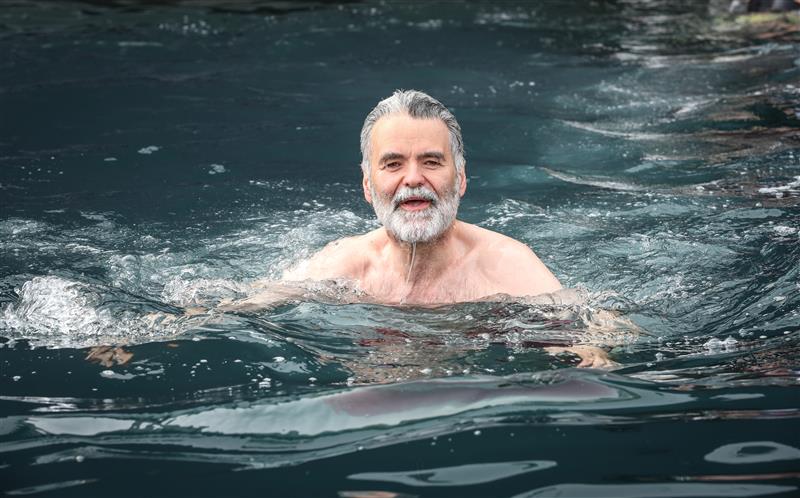 “I had pre-arranged for my wife, Ree Brennin Houston, to be at the gangway and to lead me to the hot tub. I was moving very slowly, like a 300-year-old man, and being careful not to injure my feet on the steel ladder out of the water, the steel floors, because I had no feeling in my feet. Diabolically, my wife got turned around in the bowels of the ship, and we ended up having to backtrack a couple of times. Aarrrrrrgggggghhhh!

“I had no higher mental functioning, which would have told us in a second how to get to the hot tub, so I dumbly followed Ree, trusting she’d get me to the hot tub to warm up my body core. And you know she did, in the end, because here I am writing this!”

Houston warns that you can temporarily lose mental capacity while  in Arctic water, and it’s important to monitor signs of growing safety hazards, and plan when and how to return to safe, dry and warm surroundings.

But he also credits the resourcefulness of those he spent much of his youth with for his gritty performance.

“I grew up on accounts of Inuit hunters returning home from seemingly unsurvivable situations out on the land, one of the most horrific always being immersion in the cold water,” he recounts. “The common element for survival seemed to be keeping calm, and going through steps.  I set out to train myself to do just that, taking advantage of the tremendous opportunity provided by several Arctic sailings with Adventure Canada each year since 1991 for me.”

And so what does someone who has spent more than half an hour in water that most are eager to exit within a minute do for an encore?

“I’m not completely sure I can beat that time,” Houston acknowledges. “Maybe I’ll have to set another goal. My current film Atautsikut/Leaving None Behind is just about to be broadcast online in 126 countries. What if I set the goal of reaching all 195?”