An insider’s look at the local food scene in Medellin

Visitors to Medellin can dabble in dishes from around the world

School isn’t out for both tourists and residents of Brian Johnston’s Medellin, Colombia, neighbourhood who want some pointers on healthy and affordable eating and are also eager to experience some of the exotic flavours the Toronto-born Johnston has come across during his wanderlust-filled life.

Johnston now oversees Via Cocina, found in the Miraflores neighborhood of Medellin, a city once synonymous with narcotraficantes but which has seen a greatly improved security situation in recent years that has resulted in a flourishing tourism trade.

Johnston told a recent Okushu Tours webinar that the classes he offers may feature culinary influences from some of the more than 70 countries he has explored or done volunteer work in, noting the house he’s based in is stocked with foods that are hard to come by in Colombia, such as olives, and features cooking utensils from afar, including woks, basket steamers for dim sum, and stone instruments from Mexico and El Salvador used for grinding.

Among countries visited by Johnston are China, home to food he praises for its diversity; India, another nation whose culinary diversity won Johnston over; Morocco; Japan; Korea; Mozambique; Namibia; Thailand; Vietnam; and Indonesia.

“All this creates a base that we use for cooking classes,” Johnston – who’s been in Medellin since 2013 – said of his travels. 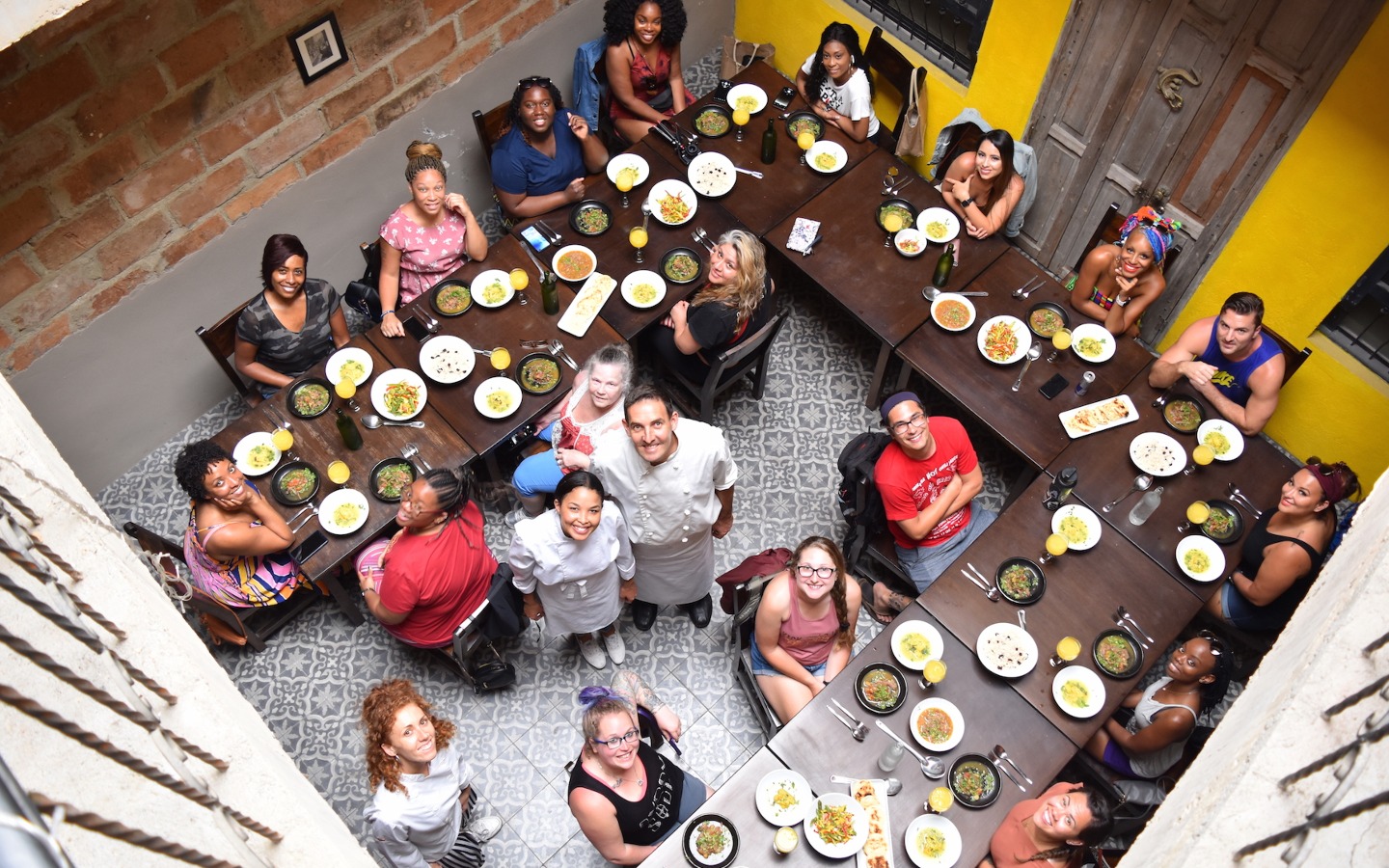 Via Cocina has hosted classes that have taught people how to make the likes of pad Thai and sushi,  while steering them away from dishes that are high in salt or fats. Class attendees can also learn how to grow organic food and create food budgets.

Johnston – dapper in his chef’s outfit – told viewers he’s also a fan of Colombian cuisine, and prepared coconut rice for them, a popular Colombian dish. Rice is a food staple Johnston said Colombians appreciate more than those in his native Canada.

“When they [foreign visitors] taste this dish they say, ‘I’m going to eat rice every day,’” he said of coconut rice.

Those taking his classes can eat their creations in  a ground-level courtyard or on a rooftop terrace. 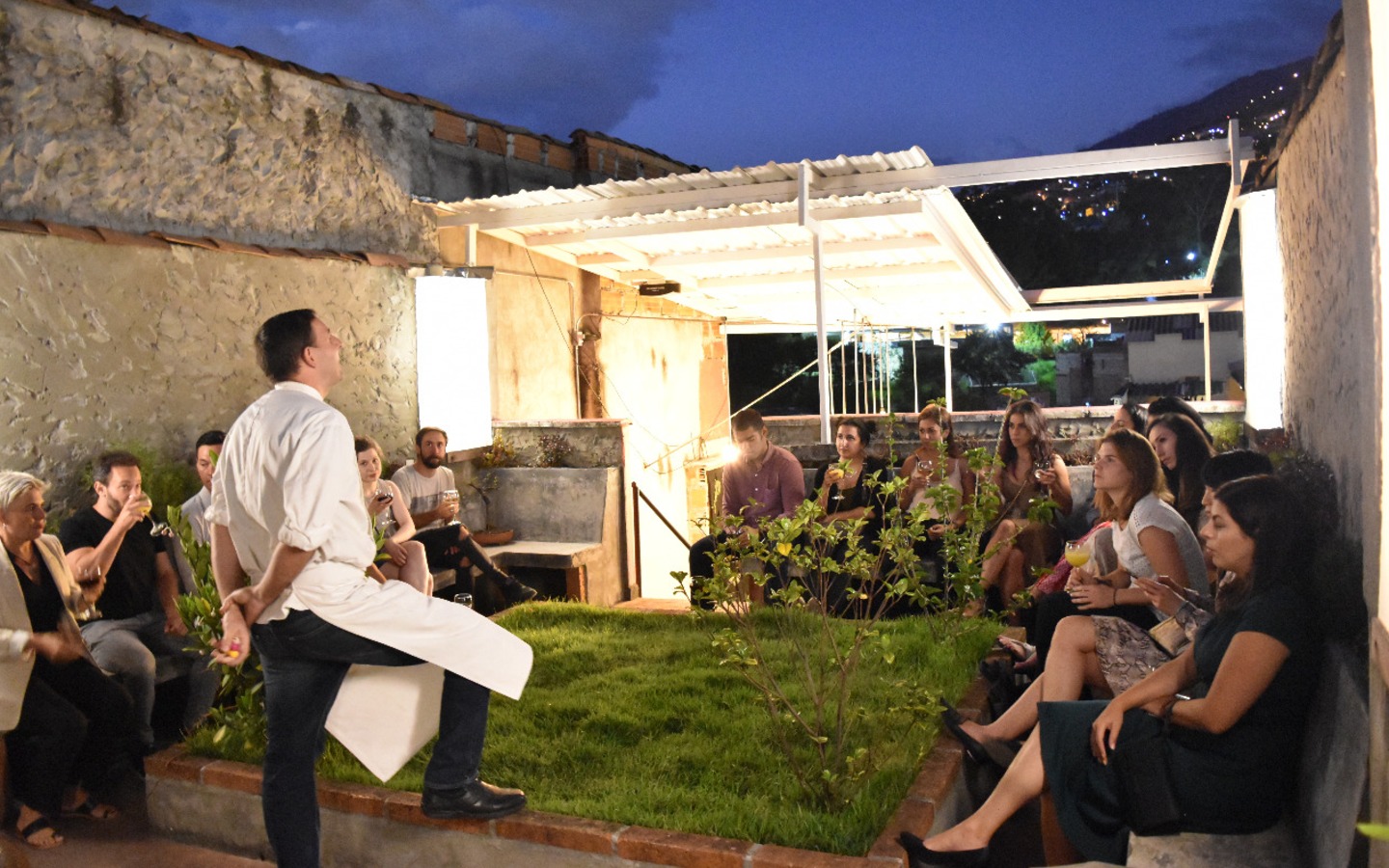 “Heavily discounted” community-based classes for locals cost around $20, with the rate halved for those with limited incomes. “The tourism activities have a higher price negotiated with the tourism agencies, as tourists can generally afford to pay closer to true local value for classes, which supports/subsidizes the community- based classes which are heavily discounted at both regular price ($20) and half price ($10).

There isn’t a minimum class size, which Johnston said “means that I run the same community class (or tourism activity) for one person or 10 people without changing the price for a smaller group, so the subsidizing is very important to have things balance out.”

Money earned goes back into the “social transformation project.”

Johnston won an AirBNB award for his venture but the prize – a trip to Italy, where he would have met prominent Italian chefs – was cancelled because of the coronavirus pandemic. Instead, he received money, which he used to buy an Italian-style pizza oven.

Johnston’s happy to accommodate the likes of vegan and vegetarian visitors and can tailor meals for visiting groups, with Johnston noting he’ll serve baguettes to French groups.

Groups of up to 28 can be accommodated at Via Cocina, with a group of that size being divided into separate groups of 14.

Tours are available in French, English and Spanish from the trilingual Johnston. 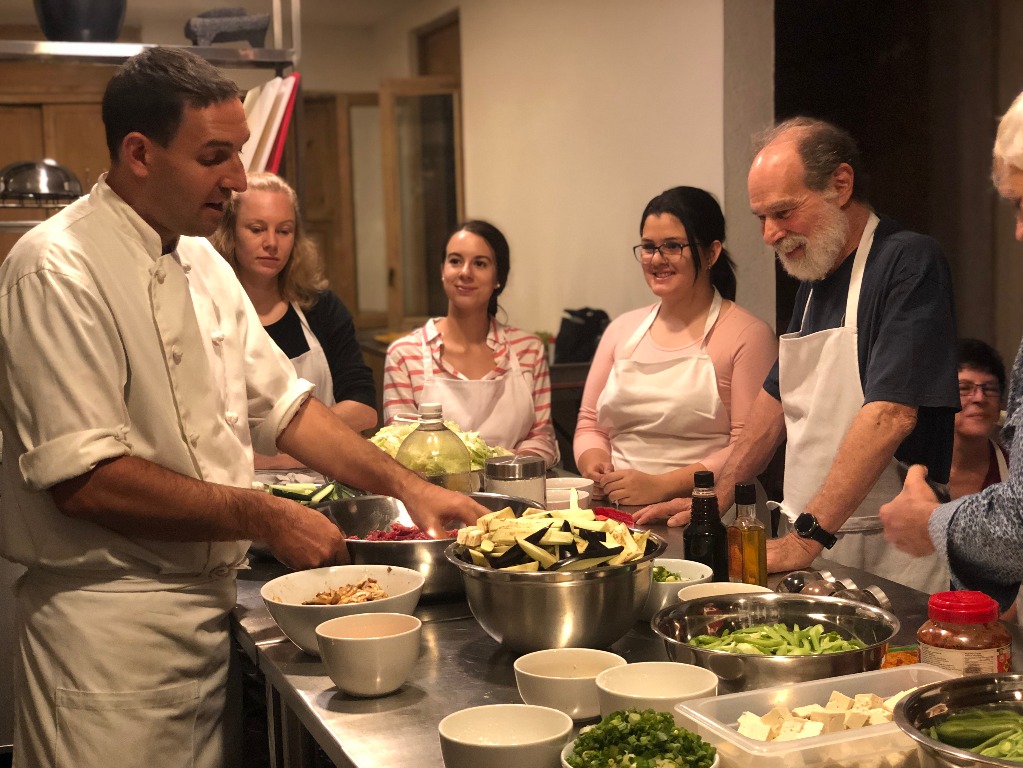 Lau described her company  as a niche tour operator whose motto is “Experience the Difference.”

Okushu Tours supports sustainability travel in 3 areas: environmental protection, social impact, and economic support.
“When clients book Okushu Tours products, they are going to support the local people and communities. Brian’s project is one of the examples,” Lau said.

During the webinar, Lau announced Colombia tour programs that go to Bogota, the Coffee Region, Medellín, Cartagena and Barú.  Programs are combinable and offer 4- and 5-star accommodations.
Contact res@okushu.com for details.

Johnston said he’s happy to draw on his own worldly past to help people learn to create new dishes in an affordable manner.

“It’s all about sharing skills and experiences,” said Johnston, who notes he’s been mentored on cooking by people living in countries far and wide.